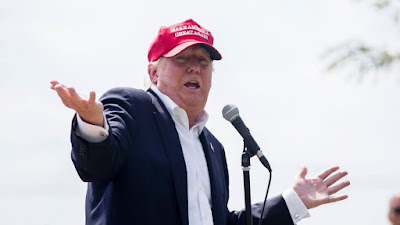 For Donald Trump this was a very bad night.  Not only did he not win, he ended up tied for second with Marco Rubio in terms of delegates, as he barely edged out Marco in the popular vote.  Some are calling the results a "Cuban sandwich with pork in the middle."  Of course, Trump tried to downplay the results, but as he likes to quote Walter Hagen, "no one remembers who came in second."

He tried to strike an upbeat note afterward, with an interesting reference to Mike Huckabee, who he appears to think he has in his corner now.  Not that it does him much good, except maybe in Arkansas, where the Trumpster is making a campaign stop this week for no explicable reason other than he hopes Huck will give him a formal endorsement now that the former Arkansas governor is finished as a presidential candidate.  Trump hopes to sweep through the South on Super Tuesday where he has been polling the strongest.

New Hampshire no longer looks like a sure bet with Rubio faring much better than expected in Iowa.  It is conceivable that much of the "establishment" vote will consolidate around him now that he has proven he can reach a sizable audience.  He had been polling 15-17 per cent in Iowa before the caucuses, so 23 per cent is a big number for him.   He matched Trump with 7 delegates, one less than Cruz.

Of course the guy grinning ear to ear is Ted Cruz, who pulled off a big win in Iowa, but most likely will be this year's Rick Santorum.  It is doubtful he will do so well over the long haul, especially with so many in the Republican establishment against him.  He had taken a significant amount of abuse these past two weeks, not just from the GOP brass, but from Trump as well, who tried to hammer home that Cruz isn't even American.  All for naught, as Cruz scored big among the religious faithful.

Not that the Donald didn't make a last ditch appeal, pulling out all the stops including Ivanka, a mother-to-be, who provided an instructional video for Trump supporters to caucus for him.  She even pitched up at his Sunday rally, sporting an 8 and 1/2 baby bump for all too see, with a proud grandfather-to-be saying, "wouldn't it be great if she had her baby right here in Iowa."  At least he didn't try to induce her child birth on stage. 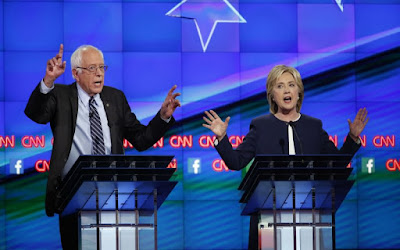 On the Democratic side, things are a little more complex.  Results are weighted in SDE's or state delegate equivalents, which means each little precinct submits delegates based on the caucuses that were held last night.  Hillary barely edged out Bernie by 5 SDE's with Martin earning 8.  The two essentially split Iowa's 44 delegates.  Not surprisingly, both sides are claiming victory.  Given that Bernie cut deeply into Hillary's substantial lead in the state and is all but assured a victory in New Hampshire, I would side with the Sanders camp.  The very narrow gap won't hurt Sanders.

The loss will hurt Trump though, as it makes him vulnerable.  All the candidates will be gunning for him in New Hampshire, particularly Marco Rubio, who got a big boost from Iowa.  The religious conservative vote isn't as big a factor in New Hampshire, so Cruz will have a much harder sell in the Granite State.  Rubio may very well do to Trump in New Hampshire what Cruz did to him in Iowa, knock him off his perch.  Two consecutive losses will be pretty difficult for the Trumpster to explain away.