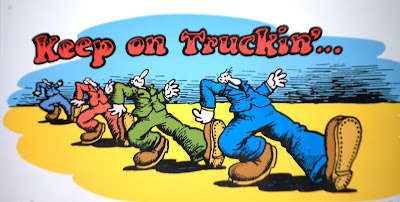 Barring some malicious October surprise or worse a November surprise, Obama stands to go out as the most popular president in the modern era.  Not bad when you consider Republicans have gone out of their way to stonewall him throughout his two terms of office.

You think of all the attempts to revoke, defund and challenge "Obamacare" at the state, federal and Supreme Court level, along with the open hostility toward the President's foreign policy, and the stunning midterm defeat in 2014, which many pundits thought rendered him irrelevant in his final two years of office, it is amazing this guy is still standing.  Obama has weathered all that abuse like a rock.  He may have a little more gray hair but he remains fit as a fiddle, and seems to have finally figured out he doesn't need Congress.

For six years, the President tried to work with Congress on health care, the budget crisis, long term deficit reductions, trade agreements, you name it.  At times he seemed sheepish and insecure, letting Congress assume the lead, only to find himself rebuffed time and again, not just by Republicans, but members of his own party as well, who openly disagreed with his trade policies.

Some argued that Obama was playing the long game.  He set enough in action his first two years in office, when he had a Democratic Congress backing him, to see these actions come to fruition at the end of his term.  That is true for the Affordable Care Act, which by any measure has been a success.  But, when it comes to foreign policy, he is finally charting his own course after six years of operating in the shadow of the Bush Doctrine.

Obama took bold new initiatives in regard to Iran and Cuba.  These are both works in progress.  There was a lot of consternation over his nuclear deal with Iran, which appears to have a significant number of gray areas that Iran is exploiting.  Obama has eased travel restrictions with Cuba but the embargo remains in place, requiring Congressional action to do anything about it.  The aim is to have enough in place by the end of his term that it would be very difficult for a succeeding President to overturn these actions.

It took awhile but Obama is now his own man, firmly in control of the Good Ship America.  The economy may not be as strong as many persons would like, but when you look at the standard criteria the current economy dwarfs that of the Bush administration, even at its peak of prosperity, before the precipitous nosedive that followed.  There is no doubt we will feel the pinch of recession at some point, but all indicators point to a strong economy through 2016, which makes one wonder why we need Trump, anymore than we needed Romney in 2012.

Obama not only oversaw a massive improvement in leading economy indicators during his second term, but did much better than Romney's promises on unemployment and gas prices.  Trump's enterprises flourished these past four years, which would make you wonder what the flaming hairpiece has to worry about.   If there is any fault, it is that Obama has been too humble about his success, not flaunting it as Romney or Trump would do.

The President seems to be more comfortable letting others give him credit where credit is due, and lately he has been getting a lot credit, even from unlikely sources like Mark Cuban.  Of course, other journals continue to discount his achievements, even suggesting that his "weak leadership" is what spawned Donald Trump.  There remains two narratives at work here.  One that properly tries to assess the situation at hand, and the other which continues to perpetuate the same misleading information to make Obama appear as if he is the lamest of lame duck presidents.

The irony came when Obama began to exercise more executive authority, issuing directives on guns in the wake of the Sandy Hook tragedy, which had conservatives comparing him to Hitler and Stalin.  Republicans became even more disgruntled when he took the lead on foreign policy in regard to Iran and Cuba.  Mitch the Turtle and former House Speaker, Long John Boehner, fumed at the audacity of the President to bypass Congress.  So, they went back to Iraq and Syria, trying to show how Obama's "weak leadership" gave rise to ISIS.

Yet, here we are in summer and there is nothing to suggest we face this great existential threat Lindsey Graham forebodingly warned us of last Fall.  Seems that if ISIS is going to launch an attack on our soil, they will wait till next year to test the mettle of the new president.  For now, they seem content attacking easier targets in Europe.

Conservative legislators love to hate Obama almost as much as they do Fidel Castro.  Unfortunately for them, they have about as much power over Obama as they do Castro.

With the election cycle reaching its second phase, Obama will be more active on the campaign trail, promoting the Democratic nominee and Congressional candidates across the country.  This is a far cry from 2014, when many Democrats didn't want Obama campaigning for them at all, preferring instead to have Billary stump for them. Didn't turn out that Bill and Hillary had a very successful rate of getting young Congresspersons elected.   It's a good thing Obama doesn't bear grudges.

The best measure of Obama's legacy will be if his popularity translates into a big election night in November -- not only the White House, but a Democratic turnover in Congress and gains at the state level.  If he succeeds in doing this then his legacy will be assured and he will have the possibility to be the most significant president since Lyndon B. Johnson.  Keep on truckin' Barry!