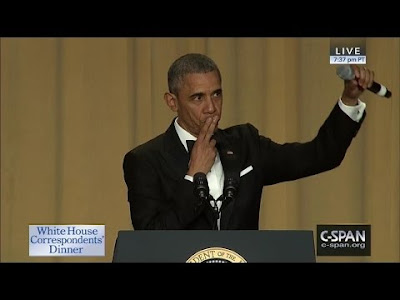 What a week!  The President offered his farewell address to White House correspondents and a wide variety of guests, many of whom he singled out during the evening.  One person wasn't there, Donald Trump, but he had his two sons represent him, with Eric saying he was looking forward to his father addressing the White House Correspondents Association next year.

It may have seemed like a far-fetched idea last June, when he descended his escalator, but that reality came a step closer yesterday when Ted Cruz bowed out of the race, failing to hold the firewall in Indiana against the raging Trump fire.  It's too bad, we were all looking forward to the dream ticket in California.

First, the good news.  The President was in fine form, playfully teasing his audience, including Reince Priebus, the head of the Republican National Committee, who seemed to take the jokes in stride.  Obama even singled out Kendall Jenner, noting how his twitter followers will increase now that he has referenced her.  The White House Correspondents Dinner has become a virtual who's who of politicians and celebrities that now spills over into a garden brunch, the so-called "pre-game."  Helen Mirren saved her Prince tattoo for that evening.

There no longer seems to be any line between entertainment and politics, which helps explain how Trump was able to sweep through the Republican primaries.  Politicians have long courted celebrity endorsements, and love nothing more than having events like this that allow for engaging photo-ops, but now it seems celebrities are taking over the political circles as well.  We've already been primed for a run by Kanye West in 2020.  Given the huge success of Trump this year, who is to say Kanye can't take over the Democratic Party in the same way, assuming he runs as a Democrat.

In the meantime, Bernie was able to put Hillary's nomination on hold by taking Indiana.  His narrow win gave him a +5 differential in delegates, hardly enough to cut into her overall lead in any appreciable way, but it shows that voters still want Bernie to run.  He has become the darling of this election cycle, a 74-year-old "Social Democrat" who has captivated the millennials, showing that you don't have to be a pop star to turn on the latest MTV generation.

What Bernie has working for him, which Ted does not, is that Sanders continues to run outside the establishment.  Ted has been getting political endorsements left and right, including that of Indiana's governor, Mike Pence, but all it has done is make Ted look like an insider, and this is clearly what the Republican electorate does not want.  The more Ted cozies up to the establishment, the more votes he loses.  He should have known that but it seems all Ted wanted was to be liked.  Unfortunately, he got walloped in Indiana, losing all 51 delegates to the Donald.

It was a staggering win for Trump because Indiana was not supposed to be friendly to him.  The only question now is whether Republicans will rally around him at the convention or mount a third-party campaign, as some have suggested, to ensure he doesn't win the White House.  The latest Rasmussen poll has him two points ahead of Hillary Clinton, albeit only 80 per cent of those polled chose to give a preference.

The other option is to rally around Hillary, although she took one on the chin this week when the media dredged up a rape case from 1975 in which Hillary apparently got the rapist off the hook.  It may have damaged her a bit in Indiana, where she was favored to win after her string of Northeastern primary victories.  It's the kind of story that can gain traction through an election cycle, much like Willie Horton did in 1988.

But, Obama steered away from these hot button issues, leaving it to Larry Wilmore to tackle the more contentious subject matter in his monologue.  Alas, Larry wasn't a big hit at the dinner.  He seemed to struggle at the podium as he ventured into a comedic and political no-man's land on what it means to be a nigger.  Best to leave these subjects to the round table, where he excels on the Comedy Channel.

What people want is a playful banter, like the President did, making as many jokes about himself as he did others.  Most amusing was his little video segment on what he would do in the Washington DC area after he left the White House.  He wants young Sasha to have the opportunity to finish Sidwell Friends School.  If only Hillary could bring a little of this levity to her campaign, then maybe fewer persons would see her as "Aunt Hillary" trying to learn how to use the social media, as Obama joked.

The Donald opts for an entirely different approach, which has endeared him to millions as the so-called "straight shooter."  For some reason, which has defied all political calculus, the Donald is seen as telling the truth whereas his opponents are seen as opportunists and liars.  He has been able to literally overturn the equations that normally govern an election cycle and make 2016 entirely about himself.

You can joke about him all you want, as Obama has done at this and previous White House Correspondents Dinners, most infamously 2011, but it doesn't matter.  The Donald is impervious to such abuse.  He uses it to motivate him, which many felt was the case with the merciless taunting he took five years ago on this grand occasion.   The time may have not been ripe in 2012 but it was perfect in 2016.  He will now represent the Republican Party in the General Election whether the GOP likes it or not.

The only question now is whether Hillary can push her rock a little further up the hill and beat him back in November.  Otherwise it could be a very black Tuesday.