The Round Mound of Rebound 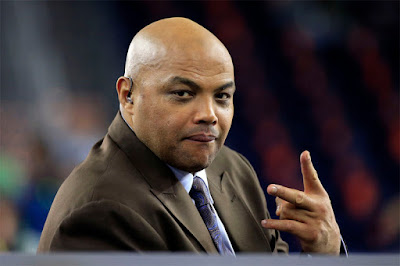 ... or Sir Charles as he likes to be called is not one to mince words.  When he is not taking down the latest crop of NBA players, he is going off on politics.  He even flirted with a political run of his own at one point, when he switched from the GOP to the Democratic Party as he floated the idea of running for Governor of Alabama in 2006.

The guy is sharp and opinionated.  He's been part of TNT's Inside the NBA for several years now, venting his full range of views whenever the moment suits him.  He has been decrying the current state of the NBA for the last four or five seasons as no heir apparent has emerged to take over the starring role of Kobe Bryant.  He admits LeBron James is a great player and the Warriors are one of the best teams ever but after that he poo-poos the quality of the league, claiming that players come out of college too soon and lack the fundamentals to play the game the way it should be played.

Another NBA legend begs to differ.  Larry Bird said recently that the game has changed considerably and that he enjoys the uptempo style that relies much more on three-pointers than it did in his day when the outside ring was introduced.

One of Barkley's biggest beefs is that Stephen Curry wouldn't have hit an otherworldly 400 three-pointers this year if anyone bothered to defend him.  It doesn't matter that Kobe Bryant says Curry is very tough to guard,.  All though, it seems Russell Westbrook has found the answer, as Oklahoma City is one game away from knocking Golden State out of the playoffs.  A fairy tale season may come crashing down around the Warriors tonight if they don't win game five at home.

Sir Charles represents the classic generational divide.  I remember my Dad bemoaning the quality of play back in the 70s, saying none of the players or teams measured up to the players of his day, notably Bill Russell and the Celtics.  The game evolves rapidly.  Today, it takes in a great number of European players, including two young Lithuanians who are maturing quickly.  Jonas Valanciunas got hobbled in the Toronto-Miami series but should be back in full force for Game 6 in Toronto as the Raptors fight to keep their series going with Cleveland.

For LeBron James a win in Toronto or back home in Cleveland would be his sixth straight NBA final appearance.  He went 2-2 with the Miami Heat, and lost last year to the Warriors with a hobbled Cleveland team that limped into the finals.  This year the Cavs look very healthy and ready for action.  But, even the great LeBron gets his fair share of criticism, particularly for his flops, none more absurd than the one he tried to pull in Toronto.  At the press interview, King James had no comment.

The high degree of flopping is indeed one aspect of the game the NBA can do without.  It has tried hard to rein this in by penalizing players who fake their falls, but still it persists.  The amazing thing about LeBron's flop in that game is that the referee was no more than a foot away from the action and should have clearly seen that James was "hit" by his own player, but instead immediately doled out three technical fouls to the Toronto players in the vicinity, only to have his outlandish call reversed on review.

Charles can rant all he wants about the young players in the league but when a veteran plays games like this, what gives?  Maybe it is because LeBron never went to college.  He went straight from high school into the pros, just like Kobe, who Magic Johnson recently hailed as the greatest Laker of all time.

Like so many other players, these two NBA greats learned their fundamentals in the NBA, not in college.  Both had to go through a learning curve, as all players do even if they complete all four years of college, which they rarely do these days.  The temptation is too great to enter the draft, where multi-million contracts await if you are lucky enough to be drafted in the first round.   Even Charles forwent his last season at Auburn to go into the NBA when his draft stock was highest.  It's all about the money and no hot young talent wants to waste away a year in college when he could be signing a big fat NBA contract.

With Kobe's retirement and LeBron soon to follow, the NBA is restless for the next great star.  Stephen Curry is the current front runner coming off his second MVP season, but looking at Kevin Durant and Russell Westbrook I would say these two are every bit as deserving, if not necessarily putting up such gaudy stats.  For me, Kevin Durant is the reincarnation of Julius Irving, my favorite player growing up.  He makes the game look too easy. 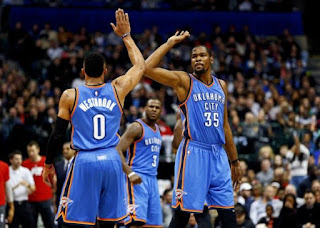 Oklahoma City already defied expectations by knocking out San Antonio after taking a drubbing in the first game of that series, and now has Golden State on the brink of defeat, needing three straight wins to reach the NBA finals for the second year in a row.  A part of me would like to see the Warriors cap their record breaking 73-win season with another NBA ring, but the other part is glad to see Durant finally come into his own with a team that can now seriously compete for a championship.

Unlike Sir Charles, I like the way the game evolves with new raw talent coming to the fore.  It takes great effort to shape these athletes.  Few come into the league ready for prime time.  That's always been the case, it's just that now these players are expected to shine from day one because of their massive contracts, and I guess some persons are disappointed when they don't.

Don't take it out these kids, Charles.  They're still learning the ropes, just like you had to do in Philadelphia back in 1984.  BTW, that was one hell of a draft that year, which had Hakeem Olajuwon, Michael Jordan and Charles Barkley among the first five picks.
Posted by James Ferguson at 2:05 PM