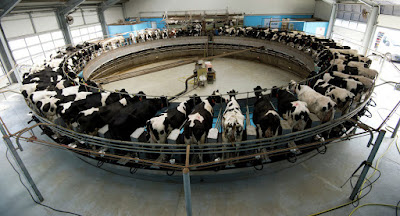 I tend to take most things vegan with a grain of salt, but I have to say that Cowspiracy gave me pause.  It is a documentary that shows the tremendous environmental impact of the livestock industry.  It's being billed as Leo diCaprio's production, but all the credit belongs to Kip Andersen and Keegan Kuhn, who initiated this project long ago, but had funding yanked when they pried a little too deeply into the way the livestock industry has managed to pull the wool over the eyes of environmental groups, which refuse to recognize the huge impact the industry is having on climate change.  According to Andersen, livestock produces three times more carbon emissions than the automotive industry.  They self-funded their work through a non-profit that Andersen created, later getting additional funding from DiCaprio and other sympathetic celebrities, which helped the documentary get significant airplay on Netflix.

Cowspiracy is well worth watching as Andersen presents it in a way we can all identify with.  He wanted to reduce his personal carbon footprint but soon realized that switching to pedal power, cutting down on his showers and other frugal personal efforts weren't enough.  What we're eating has a much bigger impact on climate change than we are being told.  Virtually none of the major environmental watchdogs have paid any attention to the ever-growing livestock industry, which is now pitching more humanitarian range-fed beef and poultry as sustainable farming.  As Andersen points out, it takes far more land and water to range feed cattle than it does if you inhumanely pen them up, as is the standard practice.  Even still, vast amounts of acreage are needed to support the vast herds of cattle around the globe, not to mention pigs and poultry. and other livestock.

Andersen estimated the global extent of animal husbandry at 70 billion farm animals.  The vast majority is made up of chickens at 50 billion, with cows totaling around 1.5 billion and pigs 1 billion.  Horses, Goats, sheep, turkeys and ducks make up the bulk of the remaining numbers.  These numbers can be easily disputed, however it is pretty hard to deny the impact the livestock industry has on the global carbon footprint.

Livestock Environment and Development (LEAD for short) estimates the total percentage of carbon emissions by livestock at 18 per cent.  The EPA places agriculture at 9 per cent.  Both are well below Andersen's 51 per cent.  However, Andersen takes into account all the byproducts, citing Worldwatch Institute.

Land depletion is the other major factor here, as vast acreages of forest land are being plowed under each day to support the livestock industry, reducing the earth's ability to absorb the excess carbon emissions.  Andersen adds that environmentalists and  journalists who have investigated the devastation taking place in the Amazon basin are under constant threat and many have been killed, including Sister Dorothy Mae Stang in 2005.

Andersen also points to the strong arm tactics in the United States to intimidate environmentalists and journalists.  Typically, lobbyists do the dirty work, spending vast sums of money to influence politicians to turn a blind eye to the unsavory practices in the industry.  For years our food pyramid has been overtly influenced by the beef, poultry and dairy industries to make it top heavy in favor of these food products.  The dairy industry continues to insist adults need to consume dairy products at least three times per day despite the overwhelming calls for less lactose in our diets by health officials.  The Got Milk? ads are everywhere, even though the dairy industry has come under fire for inhumane animal practices, as well as unwanted additives in their dairy products.

But, Andersen focuses mostly on the environmental impact, which is massive and at this point seems irreversible given the far-reaching power of the livestock industry.  He states that it takes 6 times more land to sustain the livestock industry than it does the agricultural industry.  Not that there aren't questionable practices in the agricultural industry as well, but it is far more sustainable than the livestock industry, which is squeezing out more farmland every day to sate our ever-growing appetite for beef and poultry.  He should find comfort in the Smithsonian reporting on this crisis back in 2012, noting that 26 per cent of our terrestrial surface is devoted to livestock grazing.

While I'm not quite ready to become a vegan like my daughter, there is clearly a lot of food for thought here.

Posted by James Ferguson at 3:10 PM