A little love would go a long way right now 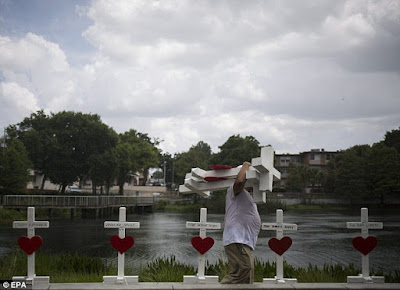 The first stage of loss or grief is denial and we are seeing plenty of that in the aftermath of the Orlando shooting.  Rather than recognize it as a hate crime and deal with accordingly, Rick Scott, the governor of Florida, actually had the audacity to request the federal government for an emergency declaration so that the state would be entitled to federal relief.  FEMA denied the request stating that Scott didn't demonstrate a financial need and noted that no governor had previously asked for such a declaration in the wake of a mass shooting.  As it is, FEMA is covering the overtime costs of first responders.

Then came the US Senate, which rejected 4 Democratic bills that included tighter background checks and a ban on sales to persons on terrorist watch lists.  Relative no-brainers, but it seems the NRA is calling the shots in the Senate and the bills failed to reach the 60-vote threshold necessary for ratification.  Apparently there are those who think the real victim is the AR-15, not the 100+ persons who were shot in the Pulse nightclub, 49 dead.

This was followed by Trump dialing back on his most bellicose rhetoric, claiming he never said club goers should have been armed.  This despite video recordings that went viral.  He appears to at least recognize he went too far, but rather than retract his statement, says he never made it, as he can never be wrong.

So, what is all this hand ringing about?  It obviously isn't about the victims of this horrible tragedy.  You see them rarely mentioned.  The conservatives have bent over backwards trying to make a case that this was an act of "radical Islam" and insist on holding the Obama administration accountable for allowing such elements to sneak into our society and carry out such atrocious acts.  Yet, Omar Mateen was born and raised in the US, spending most of his life in Florida.

Rather than admit it was a hate crime and deal with it accordingly, the GOP is determined to make this into a political whipping post, claiming that if we allow more refugees into the country we will end up with more Omar Mateens and Dzokhar Tsarnaevs.  They insist on focusing on the Muslim descent of these homegrown terrorists rather than acknowledge that the vast majority of these shooting and terrorist acts are carried out by white Caucasians.

Worse, they refuse to pay more than passing reference to the huge hole this latest act left in the LGBT community, which already feels very vulnerable in our society.  When Trump did try to address the gay and lesbian community, he attempted to pit it against the Muslim-American community, unable to comprehend that being of different sexual orientation is not a matter of race or religion.

Sadly, for many conservatives they continue to deny the hate that is directed at the LGBT community on many levels, not just atrocious acts like that committed in Orlando.  Rick Scott has his own page on the LGBTQ Nation website and it is not a very flattering one.  This is a guy who has consistently fought against gay rights equality, yet now wants to turn this tragedy into a political tool to deflect attention away from his horrible record as governor.

Basically, the Republicans don't want to deal with gays, so they look for ways to morph this incident into something else entirely.  Persons who should know better, like John McCain, have even gotten in on the act, holding Obama directly responsible for the tragedy by saying he hasn't done enough to curb radical Islamic terrorism.

It's staggering to see this level of denial taking place.  The President tried to address it, but his words seem to have fallen on deaf ears in the conservative community.  Obama dealt with the issue of ISIL and demonstrated that it had nothing to do with the tragedy in Orlando.  Later, he met with families of the victims in Florida, something few Republicans have chosen to do accept in the company of the President.  Obama has tried to make this a time for national healing not political brinksmanship.

Unfortunately, it is an election year and no incident, no matter how tragic, is immune from being made into a political tool, which one party or the other seek to use as leverage in their state and national campaigns.  The Democrats seek to use it for pushing for greater gun control, while Republicans seek to use it in their campaign against "Radical Islam."  Maybe we should all step back for a moment and acknowledge the pain and suffering that took place not only in the LGBT community but the families of the victims as well.  A little love would go a long way right now.