The Aftermath of Orlando 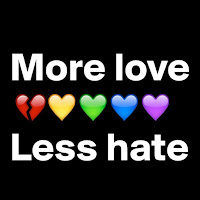 It doesn't matter that the shooter was born and raised in the US, he is being treated as an alien.  Someone outside our society despite the fact that he lived and worked in Fort Pierce, Florida, as a security guard for G4S.  Before that he had been a prison guard, according at Marin Correctional Institution.  Omar has already secured his own wiki page.  It would be nice if the 2016 Orlando nightclub shooting page focused more on the victims.  At least wiki took the time to name them.

None of that matters in the eyes of the GOP presumptive nominee and numerous conservative pastors and pundits.  Omar is a "radical Muslim" and should be called such, claiming that his faith is largely responsible for his radicalization.  Trump has revived his "Muslim ban."  Others have called for the immediate deportation of all Muslims.  Others felt the LGBT community got what was coming to them.  It is pretty hard to distinguish between two evils, but Trump seems to be trying to play the LGBT community against the American-Muslim community in his comments.  Dan Savage isn't biting.

Like it or not, Omar Mateen was a homegrown terrorist, just like Dylann Roof and Adam Lanza, but because his parents came from Afghanistan 30 years ago he is portrayed as an "immigrant."

In that sense, Donald Trump is also an immigrant, as his mother came from Scotland in 1930. His father,  Fred Trump, was a first generation American.  His parents came from Germany, which apparently was an issue for Fred during WWII, as he told friends and acquaintances they were of Swedish origin.  Apparently, we are supposed to distinguish between immigrants of European and Central Asian descent.

As President Obama alluded to in his speech, we went down this road before and it was an ugly chapter in our history.  We forcibly removed and detained Japanese-Americans in holding camps throughout WWII, resulting in these families losing their property rights, and being denied their basic civil liberties including the right to vote.   This is what many conservatives are now calling for with Muslim-Americans.  Obama went onto note that never has our armed forces been more diverse, referring to a commencement ceremony he attended at the Air Force Academy.  Are we to divide our armed forces as well?

It's not like the conservative community has been very friendly toward the LGBT community either.  In fact, many states have gone out of their way to defy the recent Supreme Court decision to allow gays and lesbians the right to marry.  Numerous states still ban sodomy despite another USSC decision that ruled these laws unconstitutional.  Gay clubs have long been targets of attacks.  Yet, many conservatives see Mateen's attack on the Orlando club as something distinctly Muslim.  One can only shake one's head in wonder and how conservatives try to reconcile these conflicting emotions.

In fact, many conservatives seem to think the real victim here is the AR-15, the assault weapon used by Omar Mateen, which is once again subject to attack by liberal anti-gun advocates.  The Democratic filibuster in Congress to bring a vote on gun control stretched for 15 hours, beating out Mr. Green Eggs and Ham himself.  Since the assault rifle ban was not renewed in 2004, sales of the AR-15 and other military style semi-automatic weapons has risen astronomically.  There are now over 5 million AR-15 rifles in circulation.

Rather than mourn the victims of this awful attack and try to bring peace to the community, the Pulse night club attack has become a political high water mark for all the wrong reasons, forcing the President to address the awful rhetoric spewing from Donald, who has decided to make this incident about himself.  Not to let "Cheeto Jesus" soak up all the attention, some conservative members of Congress have decided to spout off as well.   Trump even implied that Obama has some kind of hidden agenda by not responding to what the Republican nominee sees as a blatant case of "radical Islam."  Essentially, Donald is reviving the birther argument, which he tried to spearhead in 2011.

Sadly, conservatives have politicized "radical Islam," refusing to acknowledge that this "war on terror" knows no boundaries and isn't confined to one religion.  In fact, the so-called "radical Islamists" we hear about are more akin to anarchists, wanting to create chaos in the world and overthrow Muslim states without any coherent plan as to how they would govern such a state.  Afghanistan was a prime example of this, where the Taliban led the country to ruin in a handful of years, making it fertile ground for Osama bin Laden and al Qaeda.

In Trump's view, he represents America.  He not only portrays Omar Mateen, but Barack Obama as outside the mainstream of this country, and Hillary Clinton as guilty by association.  It is this noxious attempt to project the opinion of a relative handful of supporters onto the nation as a whole that carried him through the primaries and he now tries to do the same in the general election.

To the credit of the GOP, many leading Republicans have challenged Trump on this political posturing and are now trying to distance themselves from him.  However, Trump has ignited the base of the Republican Party so it is really hard to see how this will serve the party well in the months to come, especially as his national poll number slide precipitously, which of course he refuses to acknowledge.

This should have been a time we rallied together and showed our support for the LGBT community, but rather we find ourselves bitterly at odds once again over the motives for the attack.  Whatever demons Omar Mateen carried inside him were entirely his own, not those of Muslims or anyone else.  As reports trickle out, it sounds like Omar was battling his own sexual identity and picked the cruelest, ugliest way to play out this internal battle on others.  If we want to call this attack what it is, then call it a hate crime.