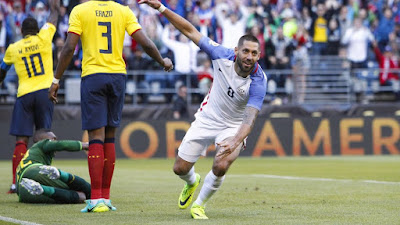 Watching the US men's national team make a run at the Copa America title had Americans thinking a Miracle on Grass might take place until the USMNT ran into Argentina.  The number one club in the world didn't even let the US team get a shot on goal in 90 minutes, cruising to a 4-0 win the semi-finals.  The US had a shot at redemption in the consolation match against Colombia but it was not to be.  They fell again 1-0.

We should be pleased the US team got as far as it did as football (or soccer as we call it in the States) is not the number one sport in the country.  At best, it is a distant fifth as team sports are concerned, with ice hockey garnering much more attention.  Kids grow up playing soccer all over the country but by the time they reach high school they usually have switched to one of the big three: football, basketball or baseball, leaving soccer little more than a pastime.  As such, it is hard to generate much interest in these world events.  However, this being the Centenario of the Copa America there was more enthusiasm than usual with the US team going into the tournament.

There was plenty of good will to go around with Central and South American clubs visiting American football teams during spring practice.  Mexican superstar Chicharito was completely awestruck to meet J.J. Watt in Houston, exchanging signed jerseys and footballs.  The good will we badly needed at a time when Trump has been shitting all over Mexico.  Venues were full and television ratings up.  There were some problems with the long distance travel between cities but Lionel Messi blamed the Argentine Football Association for the delays not the airports.

The US team cruised through its bracket and took out a tough Ecuador team in the quarter-finals in Seattle.  They fared better than powerhouses Brazil and Mexico.  Still, it was a bit of a letdown to see them get trounced by Argentina.  Everyone was hoping they would make a game out of it, but it appeared the young Americans were awestruck by the star power of Argentina and let Lionel Messi have his way with them.

The strong showing puts the US team back on track for the World Cup in 2018, but it seems those close to the game want a more aggressive style of football and would like to see coach Jurgen Klinsmann go.  He was the star of the German national team and led them to a World Cup win in 1990.  He's been managing the US team since 2011 with mixed results.

In turn, Klinsmann has criticized the club atmosphere of the Major League Soccer in America, saying that it doesn't toughen up the players for international competition.  The MLS is to the European and Latin American leagues what the European Football League is to the NFL.   The MLS has tried to beef up its rosters by bringing in big name European players like David Beckham, but they are usually at the tail end of their careers and looking for a golden parachute.  Beckham was paid roughly $250 million for his five years at the LA Galaxy.

It is doubtful a US team will ever win the World Cup or any major international tournament.  There simply isn't the groundswell of support in this country to push players to this level.   Having failed to qualify for the Rio Olympics this was a great showing for the Americans and proof they can play at the international level.  Let's hope they keep it up the next two years so that they qualify for the World Cup.