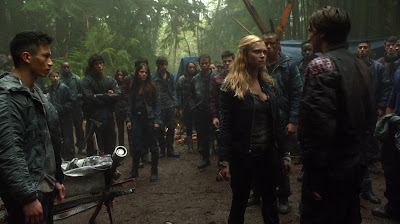 If you look at the future through movies and television shows, it is pretty bleak.  There aren't many, if any, that view it in Utopian terms.  Things tend to fall apart, as Chinua Achebe noted long ago.  It is hard to hold together a society under any circumstances and even moreso when oxygen is running out, as is the case in The 100.

The show just finished its third season so I have plenty of catching up to do.  My daughter enjoys watching it the second time around, even if she gets annoyed by my comments.  These futuristic tales are mainly aimed at providing vicarious thrills.

It is a mash-up of Lord of the Flies, Lost. and numerous other sources, pitting 100 kids essentially against each other as they struggle to adjust to life on earth after 97 years.  Most of them are delinquents of one form or another, yet two are the children of commanders aboard a hybrid space station called the Ark, which has managed to orbit the Earth all these years thanks to resourceful engineers who patched together a dozen international space stations to support approximately 2000 persons.

The commanders had to resort to Draconian methods to conserve supplies but now that they can no longer produce sufficient oxygen they decided to send the kids down in a dilapidated landing module to see if earth is habitable.  Of course, you can ask why not send trained scientists to assess the planet but then it wouldn't be a show for teenagers.

We get a few sex plays in the beginnings with sumptuous "teens," but the creators focus mostly on the survival aspect as the kids learn over the course of the first half dozen episodes that they have to stick together if they are going to handle the "Grounders," the toxic fog, and other nasty aspects of this surprisingly lush planet.  Grounders aren't zombies but rather primitive survivalists who managed to withstand a nuclear Armageddon.  Of course, most of these "teens" are 25 to 30 years old, otherwise there we wouldn't be treated to such scenes as this one, with young Octavia as a very fetching muse.

Clarke emerges as the presumptive leader.  Her mother is a doctor aboard the Ark and she has picked up a lot of valuable first aid skills.  She has to deal with the openly rebellious Bellamy and simmering bad boy Murphy, but otherwise most of the teens support her.  Even Bellamy comes around in the first few episodes, as she is willing to make the tough decisions he is not.

Like Lost and The Walking Dead, the creators aren't afraid to kill off lead characters, giving the show plenty of tension.  It is also very fast paced, much faster than the languid sequels to The Hunger Games.  This helps in glossing over a number of details that would bring this show down in a big heap if you focused on them.  The actors are a bit too earnest at times, but you can also forgive this as the age group this show is appealing to are mostly young teens like my daughter.

However, one has to wonder what psychological impact these Dystopian future visions have on kids.  Hope is largely presented as illusory, something adults hold onto but the kids have abandoned for the most part.  They tackle this new world mano-a-mano and may the best man or woman win.  Clarke is a strong character, which I assumed was why my daughter likes this show so much, although she told me Octavia became her favorite after she met up with one of the Grounders later on.

It also makes you realize kids want to be told the truth, not some water-downed fantasy of the future.  They want to be able to deal with it when it comes.  In that sense, shows like these are good in that kids realize that ultimately they have to fend for themselves.  Parents can't protect them, which is actually more disheartening for us than it is for them.  We wish we can always be there like some holographic image guiding them through their more difficult moments.

This world is what we make of it, and I'm curious to see how these Grounders turn out.  Makes me think of Logan's Run when Logan and Jessica finally broke out of their hermetically sealed dome to find a lush world that the elders had shielded them from, and come back to tell the others what they had seen.  Unlike Plato's cave allegory it was a happy ending.  We'll see what will be the case with The 100.