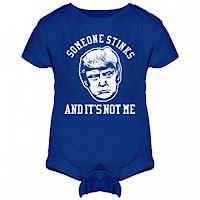 If there is one thing our President-elect can't stand it is being challenged.  His spokeswoman said that Donald may not be so forgiving if Hillary Clinton presses ahead with the recount in the Upper Midwest states.  Donald also tweeted that the popular vote is a sham due to illegal votes being cast, reviving his own fraud charges from the campaign.  Seems he also doesn't like the fact that he wasn't popularly elected.

I don't imagine Team Hillary would have signed onto the recount if there wasn't something to indicate that irregularities occurred in Wisconsin.  This does open up a potential Pandora's Box, which seems to be what the Obama administration is worried about.   A rigged electronic voting machine would potentially throw all state vote totals into question.

This has been a crazy election cycle, so it is a fitting capstone that the results are being challenged.  One can bet if there had been this much uncertainty surrounding the 2012 results, Team Romney would have at least challenged the Ohio vote count, as he and his staff were so sure they had the Buckeye State in the bag.

Never has there been so much concern regarding a foreign country interfering with the election as there has been this year with Russia.  Not only were the hacks into the DNC computers believed to have originated from the Kremlin, but one of the Kremlin's spokesmen said he was in contact with the Trump campaign team, knowing them all personally, although he eventually retracted that statement.

It's not like the hacking has to originate from Russia anyway, there are plenty of cyberpunks around the country glad to crack into computer systems if for no other reason than to create chaos.  This is basically the MO of Wikileaks, which has turned from whistleblowing to cyber theft.  What Assange did is no different from what Nixon's band of crooks did at Watergate, yet no one is holding anyone accountable for these hacked e-mails.  Given Assange's cozy relationship with Russia Today, all this could have been easily orchestrated by the Kremlin, but because of the relative anonymity of the web very hard to prove.

That is the case with the alleged tampering of electronic voting machines.  One can demonstrate how easy it is to hack the older machines, which are still in use in many states, but very hard to prove whether someone actually did it without having a paper ballot to run the electronic results against.  It doesn't seem that such duplicate ballots exist.

Trump should be more magnanimous given the likelihood of turning the results in Wisconsin are very slim.  Hillary would have to make up more than 20,000 votes and most likely whatever hacking may have taken place would have altered the outcomes in very small degrees, hoping for a close election to tilt the balance in favor of one candidate.  The only real danger is in discovering a machine was hacked, but even here the RNC can pass it off as an isolated incident and push for state officials to validate the results.

It makes no sense for Trump to be lashing out like this, but sadly it is his nature and if these election results hold up we can expect much more of this behavior in the years ahead.  He is an angry, vindictive man who cannot tolerate being challenged and will stop at nothing to get his way.  He made no effort to disguise this ugly trait during the campaign, so one can only assume many Americans accept his bilious nature and are hoping he "drains the swamp" by vanquishing anyone who stands in his way, especially Hillary, who they would love to see hung in effigy for the perceived sins of the federal government.