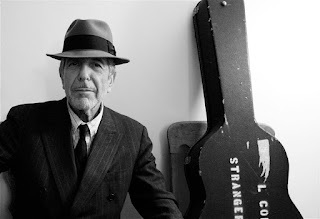 The loss of Leonard Cohen and Leon Russell over the last week adds to the somber mood that has gripped a large segment of this country.  Kate McKinnon, who has been impersonating Hillary Clinton on SNL Cold Open, somehow found a way to bring it all together in her haunting solo of Hallelujah.   This truly seems like the end of an era, one we won't fully realize until the reality of Donald Trump's presidency sets in next year.

Cohen's music always carried with it a sense of tragedy.   The songs have often been romanticized by other singers who covered them, but in their original form they evoke a feeling of despair, which we struggle to fight our way through.   Songs like So Long, Marianne grew even more haunting with his recent live appearance, even though he had a sardonic grin at the end of each performance, as if to say it will be OK.

Leon Russell had his own way to evoke a sense of loss, rooted in blues and early minstrel traditions.  You listen to his original version of Masquerade and it conjures up an entirely different impression than George Benson's cover, which became a runaway hit.  For the most part Russell kept to himself after his peak in the 1970s, seemingly content to write songs for others, but he too enjoyed a comeback in his August years.

2016 has been a very rough year for music.  We lost so many great songwriters and performers.  Some we knew would have to go, but the deaths of David Bowie and Prince took us by surprise, and left many with an inconsolable sense of loss.  Their music will help ease us through what is going to be a very troubled time come January.  Leonard Cohen's  First We Take Manhattan in its own odd way can serve as our call to arms to take back our country.
Posted by James Ferguson at 11:02 AM