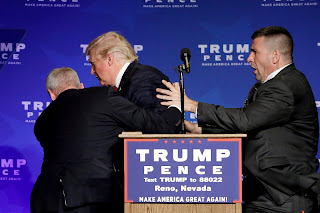 Whatever momentum Trump had last week evaporated over the weekend.  Running for cover in Nevada didn't help matters any.  He looked visibly frightened by a man who had worked his way to the front of the crowd, holding his placard in a way that appeared to indicate he might be hiding something.  Turned out all he was hiding was what the placard stated, Republicans Against Trump.

It gives you a pretty good idea how deep the paranoia runs through the Trump campaign these final few days.  He'd already railed against Nevada election officials for allowing polls to stay open long after eight in hotly contested Clark County to accommodate all those waiting in line to vote.  Early voting in Nevada appears to heavily favor Democrats, which means it is going to take a very strong showing Tuesday to pull out a victory in the state.

However, the coup de grace came when James Comey retracted his probe into the latest batch of e-mails concerning Hillary, saying there was nothing to warrant further investigation.  This has to sting as Trump was counting on the charges hanging over Hillary Clinton's head through election day.

Even worse, one of his surrogates took a heavy hit when two of his top aides were convicted of purposely closing off traffic on Washington Bridge during a mayoral election three years ago. Christie was forced to suspend campaigning for Trump in New Hampshire, which was seen as a potential pick-up state for Donald.  It may turn out that Chris Christie takes down not just one but two GOP presidential hopefuls.  If you remember his embrace of Obama in the aftermath of Hurricane Sandy was believed to have undercut support for Mitt Romney in 2012.

A Trump victory was a long shot anyway, but Big Chris has been in charge of Donald's transition team.  Not a good sign for a would-be president who has been accusing Democrats of election fraud throughout this campaign.

Trump is making the election close, thanks largely to the FBI re-opening its investigation into Hillary's e-mail scandal.   However, Hillary has been holding firm in enough states to give her the 270 electoral votes needed to win.

In a last ditch effort to break Hillary's "firewall," Trump has been campaigning in Pennsylvania, Michigan and even Minnesota.  His campaign stop in Minneapolis raised a lot of eyebrows as this is considered a very safe state for Hillary, but maybe he was trying to appeal to nearby Yoopers in the Michigan Upper Peninsula, or just simply had to make a pit stop and decided to make a pitch on the tarmac of the airport.

Trump had been doing a pretty good job of staying on message after the Comey news story broke.  He was pounding away at Hillary every chance he got, but Ms. Clinton stood firm, challenging the FBI director to release the e-mails if he felt they held any incriminating evidence that she had compromised state security.  Nine days later, a sheepish Comey issued a short letter saying he stood behind his July statement that there had been no wrong doing.

This seems to have rattled Team Trump, which had been jumping to so many conclusions, including that an indictment would soon be forthcoming.  Mayor Rudy claimed to have inside information, and other Trump surrogates were saying that there was mutiny in the FBI ranks.  Once again, they find themselves with nothing to support their wildest fantasies.

The only question now is how "bigly" will Trump lose.  Some projections have Hillary winning as many as 352 electoral votes.  Nate Silver is notably more bullish, much to the chagrin of Huffpost, resulting in a "twitter battle" between Silver and Ryan Grim over the validity of his projections.  For Donald's part, his aides have revoked his twitter privileges these final days, hoping to avoid any last gaffes.