As "cray" as that sounds 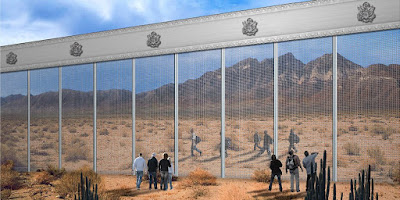 What a compelling argument,

One of the things with the wall is you need transparency.  You have to be able to see through it.  In other words if you can't see through that wall - so it could be a steel wall with openings, but you have to have openings because you have to see what's on the other side of the wall.

After restating the need for openness four times, he goes on to give us the reason for this "transparency,"

As horrible as it sounds,  when they throw the large sacks of drugs over, and if you have people on the other side of the wall, you don't see them -- they hit you on the head with 60 pounds of stuff?  It's over.  As cray as that sounds you need transparency through that wall.

The beauty of it is, Trump can now claim much of the current wall because it is exactly the type of construction he describes, and he would have to add very little to it, as it presently measures 580 miles,

As "cray" as that sounds, the House is appropriating $1.6 billion as a down payment on Trump's "beautiful wall."   He actually sounded more intelligent in a February 2016 Town Hall with Morning Joe and Mika than he does now.  Trump said he would use the trade deficit between the US and Mexico to fund the wall.  However, negotiations with Mexico aren't going very well, so now the House is forced to ante up on the Great Wall of Trump or he might get very, very angry.

How long?  What type?  How transparent?   This remains to be seen, but Trump can now crow to his constituency that the wall is happening, as he would one of his high rises.  However, he might want to get a better spokesperson.