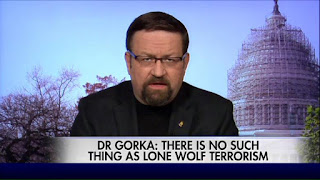 If you were curious who is the "military adviser" bending Trump's ear these days, it is Sebastian Gorka.  He's one of those characters a sci-fi writer would invent for no other purpose than to hate him.  Gorka comes from a British background but has been instrumental in shaping Viktor Orban's vision for Hungary.  Now, he is serving as one of Trump's advisers.

Currently, he's busy defending the trans ban, claiming Trump is doing transgenders a favor by not exposing them to the rigors of military life, given their high suicide rate.  Seems this self-professed expert doesn't bother to check out Snopes before he goes on air, as he would have learned that there are approximately 15,000 transgenders currently serving in the military, and an estimated 130,000 have served over the years.  Of course, estimates vary, but that's a significant number of persons to be dismissing from military service.

Gorka purportedly served in the British Territorial Army as an interpreter for three years before going onto work in the Hungarian Ministry of Defense after the fall of the Soviet Union.  He wormed his way over to America in the late 1990s, insinuated himself into conservative circles, notably that petri dish known as the Heritage Foundation, and now is one of Trump's top advisers when it come to military matters.

To hear him talk in his thick Hungarian-British accent is to immediately make you cringe.  He comes across as all knowing, yet doesn't seem to know how the American military functions, or for that matter the British military, which has allowed transgenders to serve openly for two decades without any detrimental effects.

So, why go down this alley?  This has befuddled the Joint Chiefs of Staff, which have refused to act on Trump's tweet.  It sounds like one of those actions whose sole purpose is to agitate the public and hope for some kind of ugly reaction.  Gorka is the type of person the Kremlin would plant in the White House, endearing himself to the alt-right and thus to Trump.

The Trump administration is riddled with dark spawn like Gorka, hovering around him like parasites hoping to instill in him the hatred that seethes inside them.  Stephen Bannon, Stephen Miller, Anthony Scaramucci are the most visible of these parasites, but Gorka is popping up more and more on talk shows to defend Trump's positions, probably because he wrote them himself.

It's not just transgenders who Gorka hates, he has no time for Muslims either and loves nothing more than to go into the lion's den, so to speak, to argue his points.  Like Trump, he bullies his opponents, trying to make their views sound inconsequential, but Scott Altran amply holds his own in this debate on the nature of jihad on al Jazeera.  Gorka conflates Islam with militantism, assuming them to be one in the same, a view widely held in the alt-right community.

Despite all his credentials, he is reviled by most reputable conservative groups and generally ignored by counterterrorism experts, who see his views as dangerously oversimplistic.  But, that's Trump in a nutshell.  Little wonder he fits right in.

He managed to get a position that didn't require Congressional approval, like Bannon and Miller, and now appears to wield considerable influence in the White House, much as he did with Orban in Hungary.  You were wondering why Trump and Orban were so chummy at that NATO conference in Brussels.

Trump's had a long standing invitation for Orban to visit the White House.  This ugly attempt to whip up dissent in Europe building up to the Dutch and French elections this past spring was probably the work of Gorka as well, as he hates the EU as much as he does transgenders and Muslims.  It also points to complicity with Russia, which was also helping to fuel this dissent through the widespread dissemination of fake news in an attempt to undermine Macron's campaign.

Gorka's chief aim appears to be to create chaos and hoped he might stir up a hornet's nest with transgenders, who have captured the public's imagination.  It's one of those issues that can easily be dropped if things start to veer in the wrong direction, but for now it is deflecting a little bit of attention away from Trump's other failures, allowing his dark spawn to regroup and plot other strategies.

If you needed to point to one figure that acted as a go between the Kremlin and the White House it would be Sebastian Gorka.