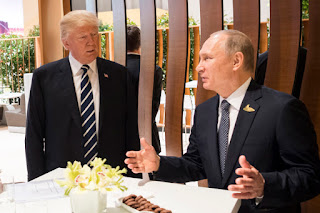 At some point today, Trump and Putin will officially meet for the first time.  They already had the opportunity to shake hands, which looked rather uncomfortable, but then it always looks uncomfortable when forced to arm wrestle Trump.

The media is fawning over this meeting like parents would a wedding, although it is doubtful that any kind of lasting relationship is going to come from this first date.   Trump's advisers are hoping that their president doesn't make any major gaffe like Reagan almost did when he met Gorbacev in Reykjavik back in 1986.  Gorby was ready to put nukes on the table and Ronnie almost fell for it, ready to commit the US to a nuclear disarmament deal that was clearly not in the US's best interests.  Of course, the famous summit has since been rewritten otherwise.

Mostly, Vlad is looking for Donald to ease sanctions and let things return to business as usual between the two nuclear superpowers.  It seems that Donald would dearly love to lift sanctions, but the Senate is not so anxious to let the Kremlin off the hook on the election meddling charges.  Since the Senate bill is stalled in the House, there is still hope for Trump, who sees normalizing relations with Russia as a means of legitimizing his presidency by scoring his first big diplomatic victory.

No one seems to know quite what to make of Trump's second trip abroad.  The sharply critical Dan Rather was oddly complimentary of Trump's speech in Warsaw ahead of the G20 summit, whereas Morning Joe called the speech one of the worst presidential speeches he ever heard, although he credited Trump for finishing strong.

Trump pretty much regurgitated the conservative talking points over the last 70 years, albeit in his rough and tumble language.  There is very little to differentiate Trump's emerging foreign policy from his predecessors other than making an existential enemy out of the Islamic State.

Trump clearly sees Russia as an ally in his efforts to curb IS in Syria.  But, Russia, nee Soviet Union, has always been able to play both ends against the middle, especially in civil wars, which is why Trump's advisers and indeed Congress aren't too anxious to leave him alone with Putin for very long.  Trump has this habit of being easily turned by the last convincing argument he hears.

Trump so far appears lost in Germany.  He couldn't even find a good hotel in Hamburg, forced to stay at an German diplomatic guest house on the outskirts of town, which no doubt put him in a surly mood. French President Macron tried to make Trump feel less alone on the fringe of the group photo, as protocol puts the longest serving world leaders in the middle.

The G20 summit offers numerous possibilities for all countries, as Angela Merkel intoned in her introduction.  With the summit on her home turf, she can to some degree set the agenda, and she has set it in a way that clearly doesn't favor Trump.  Whatever magic he plans to work he will have to do so on the sidelines as the major themes are global warming, women's rights and fair labor practices, all of which Trump has little interest in.

One can well imagine him firing over some angry tweets once he gets back to his guest house.  Trump is used to being the man at the center of events, not one reduced to the sidelines.  The only hope is that he gets some mileage out of his meeting with Putin, so he will have to make this moment count!