Trump and his Ten-Gallon Hat 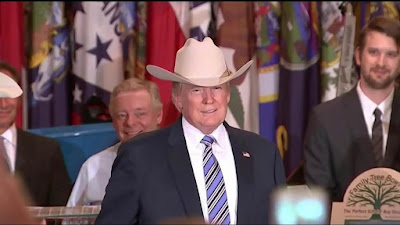 "We've signed more bills -- and I'm talking about through the legislature -- than any president."

We've come to expect such boasts from Trump, who made this one at his opening speech for Made in America Week.  Unfortunately, it was easily squashed.  It seems the only president he has "trumped" in this regard is Obama, who signed 3 less bills by this point in his administration.  Trump not only trails FDR and Truman, who he had previously mentioned, but Jimmy Carter and Bill Clinton.

Trump mostly signed bills reversing Obama regulations.  Others were simple procedural bills.  The only bills he should be legitimately proud of are those concerning the Veterans Administration, although the legislation began months before he assumed office.  What does it matter to a man who is looking for any excuse to say he has done more than his immediate predecessor?

It is clear by now that Trump only measures himself against Obama.  The major part of that is eradicating his predecessor's legacy, which is why the health care bill is so important to him.  He is convening a lunch today with Republican senators in a last ditch effort to repeal Obamacare, hoping to succeed where Mitch McConnell has failed in bringing wayward Republicans on board.

At last count, there weren't enough votes for a repeal only measure, with Lisa Murkowski voicing her objection.  The idea that the Republicans will have two years to come up with a replacement, as Mitch intoned, isn't fooling anyone.  Murkowski, like other moderate Republicans, want to sit down with Democrats and hash out a joint bill that overhauls the Affordable Care Act, not literally throw out the baby with the bathwater.

But, Trump is not one to concede on any point.  He still stands defiantly behind his claim that he would have won the popular vote had there not been voter fraud, that he has signed more bills, created more jobs and numerous other boasts that defy all credulity.  Why should he give in on the one issue that he considers central to his administration -- the repeal of "Obamacare?"  This despite his own Health and Human Services department having published a report that states the ACA health insurance marketplaces are relatively stable.

Of course, Tom Price, the head of HHS, has backed away from this report, insisting that a new health care bill would be better in every way.  Unfortunately for the replacement plan proposed by the Republicans, the CBO doesn't appear to think so.

None of this matters to Trump.  For him it is all about the art of winning at any cost.  If 32 or 33 million Americans lose their insurance, so be it.  If insurance premiums skyrocket, so what?  His imperative is to remove any traces of the Obama administration in his White House and he will go to whatever lengths to do so.

At no time have we had a more ruthless, vindictive president as we do now.  Whether it all came from the ill-fated 2011 White House Correspondents Dinner, we can only guess?  But, Trump clearly hates everything Obama stands for and is determined to erase his legacy, even if most Americans embrace that legacy.

For now, he just wants another bill to sign.  Preferably a big bill, a legacy-defining bill, like one his predecessor signed.  One would think he would be hard at work on an infrastructure bill, like that he championed during the campaign, and one Democrats said they were favorable toward.  However, Trump has made it abundantly clear he wants nothing to do with "Nancy P" or "Cryin' Chuck" Schumer, or any Democrat for that matter.

He would rather work around Congress by proposing a "vision" where much needed infrastructure improvements are carried out at the state and local level, which oddly is pretty much the way it is now.  He wants to further privatize America starting with the air-traffic control system, and if that works out expand it to the whole of transportation.  States and cities would become responsible for all road and bridge improvements.  At most, they could expect some money from the federal government to help defray costs, but much less than they are currently getting.

This is our man in a ten-gallon hat, the one who considers himself the Greatest President of All Time.  He essentially wants to sell off government like a fire sale.  Who knows, maybe he will sell Alaska back to Russia?

Sadly, there are many Americans who are just fine with this.  We have been told for decades how bad government is and that it needs to be turned upside down and all the fat-cat politicians shaken out of it.  Few stop to think that what made America great was the collaborative effort between government and business, summed up in Alexander Hamilton's Report on the Subject of Manufactures, published in 1791.  It still serves as the blueprint for large-scale building projects in this country.

Before Trump seeks out his place in history, it might behoove him to read a little history.  If he is going to spend the next 3-1/2 years fighting Congress at every turn, he is going to wear down his human battery faster than he would like.  Maybe, he should invite both Democratic and Republican leaders to the White House and at least make a show of reconciliation.  If nothing else, it should give him a boost in the polls.  Isn't that what it is all about, Donald?