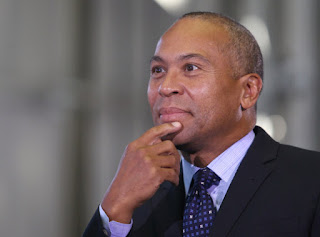 We finally got rid of half a dozen candidates who had no business being in the race to begin with, only for two more has-been politicians to announce their candidacies by filing in Alabama and New Hampshire.  I already covered Mayor Bloom, but now we have the former governor of Massachusetts, Deval Patrick.  Is there something about Elizabeth Warren he doesn't like?

If we don't watch out, Hillary may run again.  She certainly appears to be toying with the idea.  At that point, the Democratic primaries would look like The Celebrity Apprentice and it would be hard to take any of this seriously.

The DNC needs to step in before it's too late and squash any more late bids.  It's not like Bloomberg or Patrick have a snowball's chance in hell.  Deval's big pitch is that he can successfully run to the center.  Wow!  How's that for inspiring?  Apparently, he thinks Joe is too nostalgic and Liz and Bernie are too hostile.  I guess he thinks Mayor Pete is too young, and Kamala smokes too much pot.  Maybe he just wanted some attention after stepping down from governor in 2015.  The time for him to run would have been in 2016, but he like so many other promising candidates chose to step aside for Hillary.

It's not like any of these candidates can compete with Trump TV.  The guy owns the airwaves.  The only way any of these Democrats get heard is when they openly challenge the president, although Liz has gotten a surprising amount of mileage out of her wealth tax.  The Billionaire class has mercilessly derided her.  Most recently Mark Cuban, the know-it-all Maverick owner and Shark Tank host, who claims Liz is "demonizing billionaires."  He even knows the exact number of billionaires in the country.

The funny part is that these dumb billionaires play right into Liz's hand by so strenuously arguing against her wealth tax.  They only endear her to the middle class, even as Fox News claims she is worth a tidy $12 million.  Fox Business broke down her tax returns.  Too bad we don't have any returns for Donald Trump, and for that matter Michael Bloomberg.

Anyway, I don't see what Deval has to offer that Amy, Cory, Kamala and Pete aren't already offering.  Yes, Cory Booker is still in the race.  I expect Deval to stay in long enough to make the rounds of late night talk shows and weekend news programs, just to remind the future nominee that he is available for a cabinet appointment, maybe even a Supreme Court nomination should Ruth choose to retire.