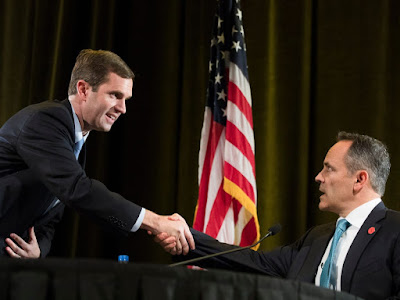 If Kentucky and Virginia are any indication, all is not well in Trumpland.  Kentuckians voted out one of Trump's staunchest allies, Matt Bevin, in favor of the son, Andy, of former Kentucky governor Steve Beshear.  Bevin won in 2015 thanks to a historically low voter turnout of 19 percent, and immediately went about undoing Beshear's legacy, especially the highly successful health insurance exchanges the Democratic governor had set up in the state.

Bevin is a product of the now defunct Tea Party.  He ran against Mitch McConnell in the 2014 Senate primaries, and upset the favored Republican candidate, James Comer, by 83 votes in the 2015 Gubernatorial primaries.  He won the governor's seat with less than 1 million votes cast that November, only because Comer chose not to challenge him in the general election, as there were many bitter feelings after that scorched earth campaign.

Comer is asking Bevin to concede if the recanvassing fails to yield any major inconsistencies in voting, but Bevin appears intent to challenge his loss to the bitter end, even if it means taking it to the state legislature to overturn the election.  This may very well be a foreshadowing of the 2020 presidential election.

Part of Bevin's complaint is that Democrats are trying to steal the 2016 election away from Trump through the impeachment inquiry.  This is a popular view in the conservative blogosphere, which even Ivanka has been trumpeting lately.  A phony argument that doesn't hold much water as the Democrats did not contest Trump's victory.  The only recount was held in Michigan at Jill Stein's insistence, but it was stopped by a federal judge who felt Stein, who ran as a Green Party candidate, had no right to challenge the results.

For three long years we have endured Trump's presidency, but many states have had to endure horrible gubernatorial administrations that have undercut much of their social and medical welfare, with no compensatory benefits in exchange.  Bevin, like many Republicans, ran his campaign largely against the Affordable Care Act of 2010, despite it having been shown to work in states like Kentucky.  He became one of the most reviled governors in the country, yet still came within 6000 votes of re-election with a turnout of over 1.4 million.  It just shows how entrenched these bitter feelings from 2010 remain, the year the Tea Party was born.

Virginia has had to endure a Republican state legislature far longer, but in this historic election Democrats took over both chambers and the new speaker will be a woman for the first time in Virginia's 400-year history as a Commonwealth.  The female backlash to conservative politics remains as strong as ever, which is a very bad portend for Trump and his allies in 2020, as the suburban women's vote may very well turn the general election in many states.  Virginia had very nearly turned blue in 2018, but a coin toss kept Republicans in control of the House of Delegates, as the last remaining race was determined to be dead even.

These are both bell weather elections for 2020, giving Democrats much to cheer about.  It is being read as a rebuke of Trump, largely because he made the elections about himself.  He attended a rally for Bevin the night before the election in Kentucky, in which he pleaded to the audience to elect Bevin as a rebuke of the impeachment inquiry in Congress.  Not to be outdone, Kentucky Sen. Rand Paul called out the whistleblower who initially brought a complaint against Trump to Congress.  During the same rally, Trump urged Virginia voters to keep its state legislature Republican if it wanted to maintain the economic prosperity he believes himself responsible for.

One can only imagine the consternation in the White House and Republican National Committee after these election results.  They figured Virginia was lost, but not by the landslide numbers that poured in.  They firmly believed they could hold onto Kentucky.  There is no way to spin these results in any positive light, so Republicans do what they do best, try to discredit the results as voter fraud.  It's too bad Andy Beshear's victory wasn't more convincing, but it is doubtful Bevin would have accepted it anyway.  Republicans still believe they have the moral majority on their side.
Posted by James Ferguson at 2:02 PM