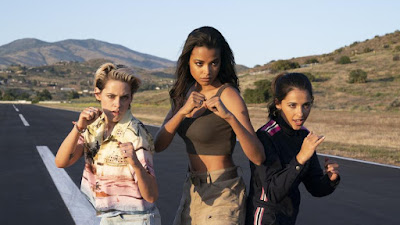 Defending Charlie's Angels as a #MeToo movie that men can't handle is not the smartest move.  The early reboots of the popular television series did quite well, largely because they stayed in the same spirit of the original.  The Angels were never meant to be more than fluff, but combining three good comic actresses made it a lot of fun, and a lot of men enjoyed the 2000 version very much.  It didn't hurt having Bill Murray as Bosley either.  This after all was a television series that gave us Farrah Fawcett-Majors, the equivalent of Pamela Anderson in her day.

The original Angels came from the mind of Aaron Spelling, who probably imagined himself as Charlie, although he got John Forsythe to play the famous voice.  The premise was quite simple, a bored millionaire decides to create a private detective agency and hires three nubile young women, who aren't going in anywhere in the LAPD, to become his undercover agents.  He has Bosley serve as his intermediary, played to good comic effect by David Doyle.  The only seasoned actress was Kate Jackson, fresh off her successful run as a nurse married to one of the cops on The Rookies, but she soon found herself upstaged by Farrah's hair.

Farrah didn't stay long.  One season, I believe.  She was replaced by "little sister" Kris (Cheryl Ladd).  Kate lasted two more seasons, finding herself replaced by Shelley Hack and in turn Tanya Roberts.  Jaclyn Smith turned out to be the house mom of the bunch, gutting out all five seasons.  Basically, the girls were interchangeable, as were most leading ladies at the time.

For Kate Jackson it must have been quite a step down, especially when you consider she was initially cast to play the role of Joanna in Kramer vs. Kramer.  A role that went to Meryl Streep and the rest as they say is history.  Kate would end up stuck on television thanks to Aaron Spelling refusing to give her permission to freelance.  I don't think Kate has any major regrets, but you wonder what might have been.

Jaclyn Smith has a long IMDB list of appearances on television series and movies, and popped up in both the Charlie's Angels reboots, but probably her greatest success is her signature line of clothing at K-Mart, including a sultry collection of underwear.

As for Farrah, she suffered the fate of every overnight sex symbol, being replaced by others.  Probably her most compelling post-CA role was as the battered wife in The Burning Bed, a made-for-television movie that was quite harrowing for its time.  However, the lasting image most persons have of her is this iconic poster from Charlie's Angels.

Elizabeth Banks is too young to know any of this.  She was only 2 years old when Charlie's Angels premiered in 1976, so she would have only seen the series in reruns, if she watched it at all.  Seems Liz just chose the premise to turn into an action movie of her own, centered around three hopelessly mismatched women who have virtually no chemistry between them.  The action sequences owe more to McG's reboot than they do the original series, but without the requisite humor the scenes fall flat.  Even the trailer is too long.

It seems Liz wanted us to take this movie seriously, but how can anyone?  She borrows liberally from all the spy movies, in particular James Bond, making Ella Balinska the de facto 007.  I guess Liz wanted to beat Barbara Broccoli to the punch, but Barb has nothing to worry about.  This Charlie's Angels reboot will be long forgotten by the time the new Bond movie comes out.
Posted by James Ferguson at 10:02 PM