A Night of Reckoning 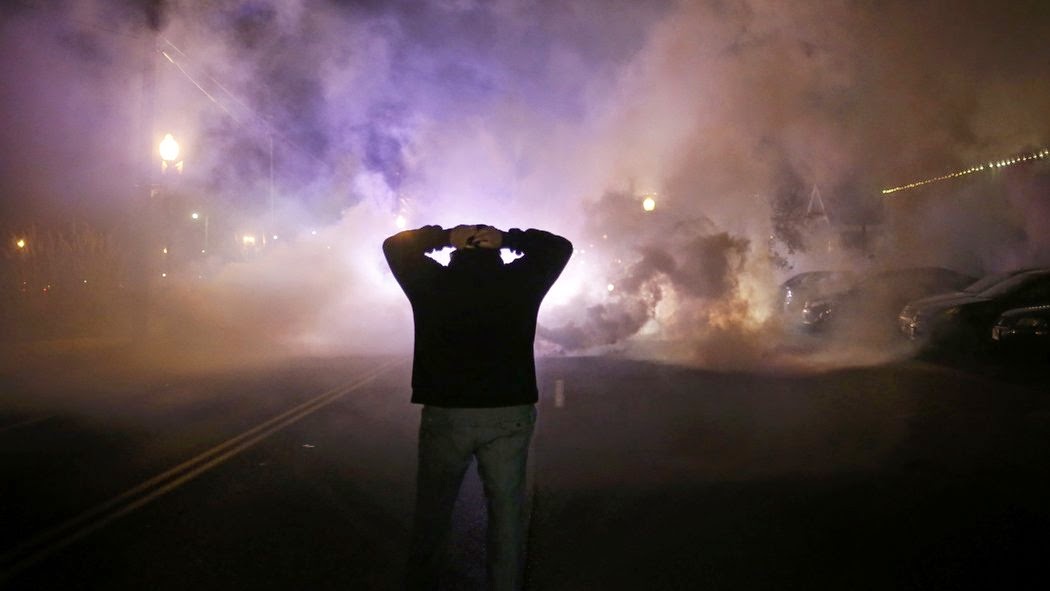 For the better part of three months a St. Louis County Grand Jury poured over evidence, statements, the rambling testimony of Darren Wilson, and determined that there was no probable cause to indict the Ferguson police officer for the shooting of Michael Brown.  This was a formal charge, mind you, not whether or not Wilson was guilty of involuntary manslaughter, the least of the possible charges the jury could have rendered.

All a bereaved mother could do was break down in tears and be carried away upon hearing of the decision in front of a large gathering in the streets of Ferguson.  Soon after, the town erupted in flames with St. Louis County mobilizing large forces to break up the crowd.

There hadn't been anything quite like this since the Rodney King verdict in 1992.  However, in that case the four police officers, who brutally apprehended King after a high speed chase, were at least charged for using excessive force, albeit acquitted.

In Ferguson, it only took four jurors to cast doubt on this indictment.  I don't imagine we will get an accounting of how the jury voted.  However, the grand jury has decided to release Wilson's testimony and other key documents following their decision, which apparently it wasn't required to do.  The chief prosecutor claimed there were conflicting eye-witness accounts, some of which were "making it up."  Wilson's own testimony raises at least one red flag, claiming he called the dispatcher and learned that Brown was identified as a shoplifter in a cigar shop just minutes before.  Wilson has been known to fudge accounts before.

Those reports about Wilson having suffered serious injuries also proved false.  He suffered little more than a slight bruise to his cheek and back of neck, but apparently there was "reasonable belief" that Brown could do more serious damage to him, which impelled him to pull out his gun and shoot him.

Eric Holder is not satisfied with the decision.  He has said he will continue to pursue the case independently, but the burden of proof is much more rigorous at the federal level.  In the meantime, Darren Wilson can be reinstated in the notorious Ferguson police force, which is facing separate discrimination charges.  The Brown family can also file a wrongful death suit against Wilson.

However, this offers little solace for a community that has faced pervasive police discrimination for decades, Surprisingly, Ferguson police are not required to have body or car cameras, pointing to a larger issue with St. Louis County in patrolling its cities' streets.  After all, Michael Brown's only "crime" when Darren Wilson chose to drive up beside him and a friend was jaywalking, as the two teens were walking in the street.

More troublesome is the way this case has broken down along racial lines, much like the Rodney King incident.  Whites overwhelmingly support Wilson, whereas Blacks solidly support Michael Brown.  The grand jury had 9 Whites and 3 Blacks for a case that took place in a predominantly Black community.

The media has similarly taken sides in this case, with conservative outlets overwhelmingly presenting news stories in Wilson's defense, and liberal media similarly favoring Michael Brown.  News channels like CNN try to straddle the fence, only to get rocks thrown at its reporters.

Prosecuting attorney Robert McCulloch blamed the media for making it difficult to present the case unbiasedly, but Kevin Curran, president of the Missouri Association of Criminal Defense Lawyers, questioned the way McCulloch presented the case -- burdening the jury with a huge volume of evidence, much of it confusing, that very easily led them to question the findings.

One can only hope that the federal investigation will be more thorough, and address what appear to be gaps in Darren Wilson's testimony.
Posted by James Ferguson at 5:00 PM