Our Man on China 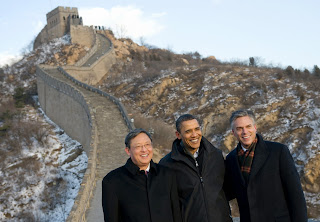 Seems Jon Huntsman is the go-to guy on China these days.  I saw him on CNN last night offering commentary on Obama's APEC appearance, a combination of praise and criticism over the President's position on China.  Huntsman served as Ambassador to China from 2009-2011, and his fluency in Mandarin is often cited in the press.

One of the President's first executive moves on immigration is to extend the time on visas for Chinese businessmen, tourists and students.   This was generally seen as favorable in the press (Huntsman included), but of course there are those opposed to it, seeing it as a "warning sign" of greater executive action to come.  Republicans have already warned Obama of the "consequences" should he try to take the matter of immigration into his own hands, but to his credit he didn't fall for the bluff.

Huntsman is an odd Republican cookie in that he favors more immigration not less -- legal preferably.  As he notes in this op-ed piece for the Wall Street Journal, immigrants are twice as likely to start a business than are natural-born Americans.  He places the onus on Congress to pass more inclusive immigration reform legislation that doesn't repeat the mistakes of the past, noting the 1882 Chinese Exclusion Act, which placed severe restrictions on Asian immigration.  I guess once the major rail lines were built there was no more need for cheap Chinese labor.

It's nice to see there is at least one Republican who reads his history and has some awareness of contemporary issues that affect America.  It used to be Republicans prided themselves on foreign policy.  Huntsman alluded to Nixon's engagement with China in the 70s on CNN, saying that the Obama administration lacks the "grand vision" in its relationships with the current Chinese government that other American administrations had in the past. 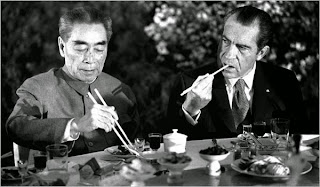 I suppose it is because much of that "grand vision" has come to pass, and now it is more a case of tweaking policy than it is re-inventing policy, at least in terms of business and cultural trade.  We continue to turn a blind eye to China's questionable human rights record, its suppression of Tibet, and its continued support of the North Korean regime.

Huntsman seems to be grooming himself for a presidential run in 2016, hoping that Republican voters have forgotten that he once served Obama, and that maybe they will be ready for a nuanced approach to politics.  As I noted earlier, he is co-chair of No Labels, a pro-business lobby that tries to offer "solutions" to the most pressing problems today.  China is key to any global business strategy and Huntsman seems to have a better handle on the situation than any other Republican, which is why he is so often invited to render his opinion.  Good luck, Jon.
Posted by James Ferguson at 8:31 AM