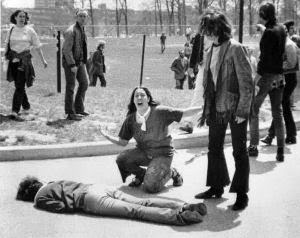 One of the most searing songs Neil Young wrote was Ohio, which he sang with Crosby, Stills and Nash.  He describes the night he and Stephen Stills put the song together upon hearing of the news at Kent State in 1970.  CSNY recorded it the next day and had it on the radio by the end of the month, offering an electric counterpoint to the Nixon administration's callous defense of the shootings that left four students dead in Ohio, which had dismissed the students protesting the war as "bums," and Zielger saying after the shootings that "when dissent turns to violence, it invites tragedy."

The student protests against he Vietnam War have lost their resonance over the years.  Yet, at their peak, these protests galvanized young Americans. In the wake of Kent State, over 4 million students protested across the country, closing more than 900 college campuses in May and June of that year.  Yet, most Americans saw the students as "bums" just like the Nixon administration did.

Young said in his memoirs that the counter-culture didn't get any respect.  Their songs were seen as dissonant and angry and for the most part dismissed by critics.  Yet,  "Ohio," released as a single backed by Stephen Stills earlier "Find the Cost of Freedom," peaked at #14 on the Billboard Hot 100, showing that the message carried.

With no Internet, the radio, particularly the college stations on the FM dial, were the major conduit for this generation to get its message out.  Songs became a form of pamphleteering, and Neil proved to be great at it.  But, there was something about the power of a four-part harmony that made Ohio resonate more than other songs at the time, largely because CSNY was so quick to get the message out.