Old man take a look at yourself 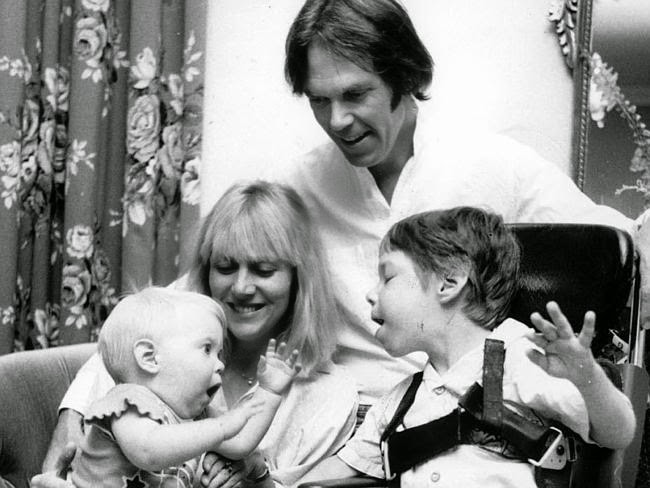 When I first saw the video for one of Neil Young's new songs, When I Watch You Sleeping, I thought that was Pegi peering through the glass at the studio session, as Neil sang with a full orchestra.  After all, he lovingly wrote of her many virtues in Waging Heavy Peace and how much she had inspired him the 40 years they had been together, especially her commitment to their son Ben, who was severely crippled from cerebral palsy.   The Bridge School grew out of this loving association.  Well, turns out Neil filed for divorce this past summer and has been palling around with Darryl Hannah, who was more likely that blonde woman peering in on the recording.

Croz was notably upset when he learned of this development, lashing out at his old friend, and throwing a proposed reunion of CSNY into disarray.  Neil had cancelled an appearance with his wife at Farm Aid, which had led many to wonder what was going on.  Graham Nash tried to be the diplomat, as Young was furious that David Crosby could speak out against him that way.  No word from Stephen Stills.

It does make you wonder about the honesty of Young's autobiography if he can end a marriage like that over Darryl Hannah. He had several relationships before meeting up with Pegi in the early 70s, notably Carrie Snodgrass.  He describes Pegi as a bartender in a small town in Northern California, where he bought a farm which the two reshaped into their ranch.  To read the book, Pegi was the light of his life, and Crosby thought there was something really special between them that would never break. 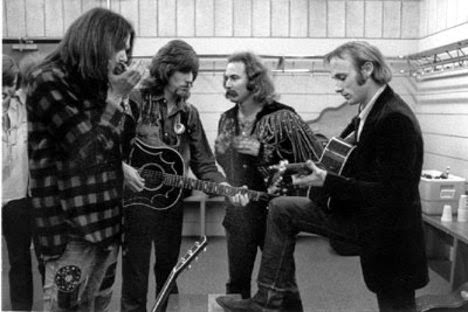 Throughout the book, Neil sounds like a man at peace with himself and the world after a long turbulent career in rock music dating back to his early collaborations with Stephen Stills in 1967 and eventually Crosby and Nash in the early 70's.  CSNY set the music world on fire with their album, So Far, and over the years have gotten back together several times.  Young recounts those days with fondness, particularly his time with Stephen Stills, who he viewed as a musical soulmate.

Neil has had a remarkable ability to split his interests in any number of ways.  When he tried to do something new in the early 80s, recording an album Trans, in which he says he was trying to envision how his son Ben saw the world around him, the record company sued him for music "uncharacteristic of Neil Young."  He also did a brief stint with the Shocking Pinks, a retro rock group that didn't please David Geffen either.  Neil would return to form, but he didn't want to be pressured into doing so, breaking with Geffen Records.  Through it all he never seemed to let go of two things, Pegi and Crazy Horse.

Well, who am I to say what drives Neil Young?  But, for a man who has put himself out front so many times you expect more from him, not only in his music but the way he presents himself as well.  Maybe this is just one of those bumps in the road and Neil was thinking of Pegi would he sang that beautiful lullaby.  I just think Neil has to take a look at himself like he did in this powerful song.