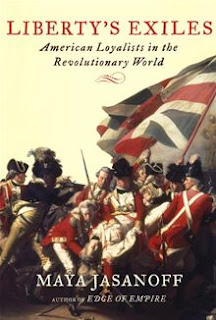 This looks like a fascinating new book, exploring the plight of Loyalists during the Revolutionary War.  Liberty's Exiles has received rave reviews, including this one in The Guardian.  Gordon Wood has this to say,

Jasanoff, who is professor of history at Harvard and author of a highly regarded work, Edge of Empire, that dealt with the ways in which British and French individuals experienced the culture of empire in India and Egypt, has turned her remarkable historical talents to the experiences of the tens of thousands of loyalists who felt compelled to leave the North American colonies that became the United States and migrated, sometimes moving from place to place, to both near and distant parts of the rapidly expanding British Empire. Jasanoff rightly claims that her book provides “the first global history of the loyalist diaspora.”

in his review for The New York Review of Books.  Note the different subtitles between the American and British edition.