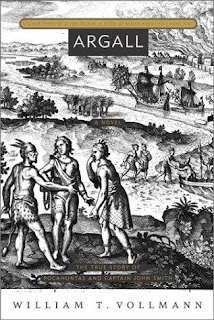 I've long been curious in William Vollmann and see that he has written a novel, Argall, that is supposedly the "true story of Pocahontas and Captain John Smith.  The author is known for his incredible output including the relatively recent Imperial.  I wonder if it was Argall that influenced Terrence Malick in his making of The New World.
Posted by James Ferguson at 5:51 PM