The Standoff in Madison 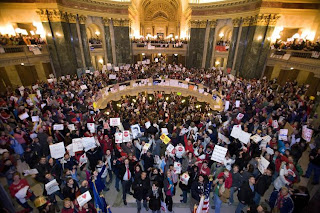 As the standoff in Madison continues, protests spread throughout the nation including some unlikely places like Arkansas.  Americans at this point seem to overwhelming favor the civil servants of Wisconsin, with nearly two-thirds of those polled supportive of collective bargaining rights.  In the process we have learned where the Republicans get much of their money.  Governor Walker revealed in a telephone sting that he answers more to the infamous Koch Brothers than he does the people of Wisconsin.  No problem, as far as Fox News is concerned, doing its best to slant their news in favor of conservative corporate interests.  Whether President Obama likes it or not, we now have a full blown class war and it is time for him to decide which side he stands on, not continue to cave into conservative interests, while paying lip service to liberal interests.  As usual, Mother Jones provides some of the best media coverage.

Meanwhile, Ohio Republicans are pushing through much of the same legislation, as the focus remains on Madison.  We can expect to see more such legislation in other Midwest states, which swung Republican in the midterms.
Posted by James Ferguson at 9:51 AM