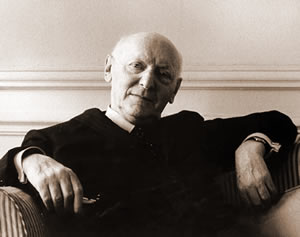 Isaac Bashevis Singer (1904-1991) is the most famous Yiddish writer of the twentieth century, and translations of his works have made him one of the most beloved in English. A prolific writer who vividly conjured the annihilated Jewish world of  eastern Europe, he spoke to the fears, longings, and ambivalence of America's modern nation of immigrants. Singer drew  on folk memories and mystical traditions to create a body of work that moved dramatically from the realistic to the fantastic, in ways that startled readers and inspired other writers. Singer's characters—often Holocaust survivors haunted by their immediate past and disoriented by American reality—dramatized the conflicts not only of postwar American Jews, but of an entire society committed both to cultural pluralism and to assimilation.

see a site dedicated to him at Library of America.
Posted by James Ferguson at 9:34 AM