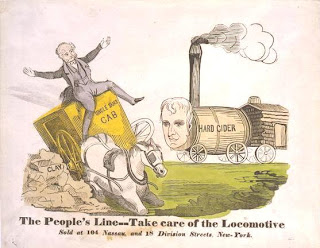 A question came up on a popular quiz show last night about Martin Van Buren, asking Lithuanian students what popular expression arose from Van Buren's nickname, "Old Kinderhook."  Sad to say, I was stumped, but the kids representing Vilnius University correctly came up with OK.  As it turns out, that's not quite the full story.  It is true that an OK Club was formed by supporters of Van Buren in 1840, but the term itself is derived from "oll korrect," a popular misspelling at the time.  Such abbreviations came into vogue in the late 1830s.  I guess Van Buren's supporters liked the double entendre in the word, as everything was OK with Old Kinderhook, but as it turns out he was no match for "Tippecanoe and Tyler Too," although we ended up getting stuck with Tyler.
Posted by James Ferguson at 2:35 PM