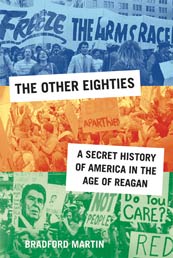 Here's a book that takes a different look at the 80s,

In this engaging new book, Bradford Martin illuminates a different 1980s than many remember—one whose history has been buried under the celebratory narrative of conservative ascendancy. Ronald Reagan looms large in most accounts of the period, encouraging Americans to renounce the activist and liberal politics of the 1960s and ‘70s and embrace the resurgent conservative wave. But a closer look reveals that a sizable swath of Americans strongly disapproved of Reagan’s policies throughout his presidency. With a weakened Democratic Party scurrying for the political center, many expressed their dissatisfaction outside electoral politics.