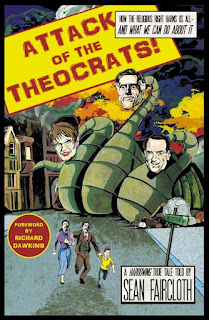 ... as Robin might say.  I remember reading Kevin Phillips' American Theocracy sometime back and thinking he was a little out there in his views.  But, after seeing how David Barton, Bill O'Reilly and Glenn Beck are attempting to rewrite American history in evangelical terms, it doesn't seem that Phillips was too far off.  Now we get another book along the same lines, Attack of the Theocrats!, praised by Richard Dawkins, among others.  It is really quite alarming, especially as we see the Tea Party showing early signs of strength in this election cycle, unseating Richard Lugar and putting up another "Sharron Angle" in Nebraska.  Chris Hedges more bluntly describes it as American Fascists: The Christian Right and the War on America, from a book published in 2007.