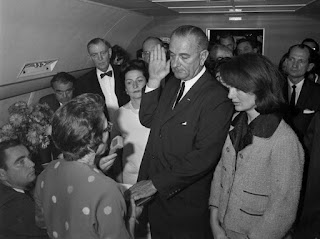 Robert Caro has come out with the fourth book, The Passage of Power, in his epic series on Lyndon Johnson.  It will be the subject of our next reading group starting on June 15.  You can read the New York Times Review.

On Nov. 22, 1963, when he was told that John F. Kennedy was dead, and that he was now president, Lyndon B. Johnson later recalled, “I was a man in trouble, in a world that is never more than minutes away from catastrophe.”


He said he realized that “ready or not, new and immeasurable duties had been thrust upon” him and that he could not allow himself to be overwhelmed by emotion: “It was imperative that I grasp the reins of power and do so without delay. Any hesitation or wavering, any false step, any sign of self-doubt, could have been disastrous. The nation was in a state of shock and grief. The times cried out for leadership. ... The entire world was watching us through a magnifying glass. ... I had to prove myself.”


He definitely responded to the moment.
Posted by James Ferguson at 5:58 PM