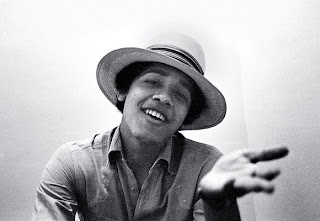 Could David Maraniss's new book on Obama, The Story, be the game-changer?  Certainly appears to be a lot of juicy details, judging  by the excerpts published in Vanity Fair.  No doubt much of it will serve as fodder for the Romney Super-PACs, anxious to have something to seize on this election year.  Genevieve Cook has a Gennifer Flowers ring to it, even if the only thing Obama can be accused of is morphing past girlfriends.

At over 600 pages, it appears to be much more than just a story about Barry's pot-smoking days, but that was what Yahoo! focused on in its salacious plug.  You have to wonder if John Kennedy would have ever gotten through the primaries if his past was brought under a journalistic microscope like this.  However, given Maraniss's Pulitzer Prize, you have to take what he writes seriously, and one hopes that the book will paint a full picture, given that Obama gave him an unprecedented 90-minute interview in the Oval Office.
Posted by James Ferguson at 11:52 PM