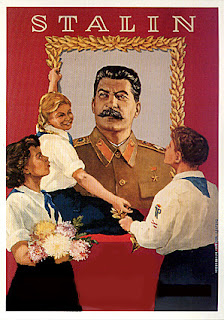 I guess what galls me the most about this series is the way Stone has elevated Stalin's role in WWII.  Stalingrad was a battle of attrition during a very bleak winter, much like Napoleon's Battle of Borodino.  Hitler, like Napoleon, had not only misjudged the Russian will to defend itself, but had seriously misjudged the exceedingly cruel winters.  It was hardly a great tactical victory.

A great book to read is Vassily Aksyonov's Generations of Winter, as he deals with this specific period in history.  It is a modern novel along the lines of War and Peace.

Fortunately for Uncle Joe, his forces prevailed and were able to drive the Germans back, seizing on the opportunity to snatch back much of Eastern Europe and a quarter of Germany in the process.  The Baltics were completely absorbed into the Soviet Union, as was the Ukraine, Belarus and a number of other former independent countries.  Stone doesn't mention this at all.

Stone seems to view Stalin as a coldly pragmatic man that could be worked with.  Most historians regard Stalin far less favorably, noting how he took full advantage of Roosevelt, much to Churchill's chagrin, using Yalta to lay claim to a great swathe of real estate.  As it turned out, Truman wasn't so accommodating, but by that point Eastern Europe was lost and the continent would remain divided for the better part of five decades.

I'm very curious to see how Stone treats the Cold War, because Stalin used this time to carry out some of his most punitive actions, with massive deportations throughout Eastern Europe and resettling large swathes of this area with new Soviet citizens.  It wasn't just Jews, as Yuri Slezkine writes about in his book, The Jewish Century, but Eastern Europeans and Central Asians as well, who found themselves being shuffled about the new Soviet Union.

Stalin wanted to amalgamate the far-flung and culturally diverse country into a whole and the only way to do that was to break down subordinated national identities.  You can still see the effects of this today in places like Kaliningrad, probably the only place where this cultural genocide succeeded.

So, when I see Stone making Stalin into a heroic figure, I just have to wonder from whose point of view is he  writing this "Untold History of the United States?"  It sounds pretty much like that which my wife told me was taught in Soviet schools.