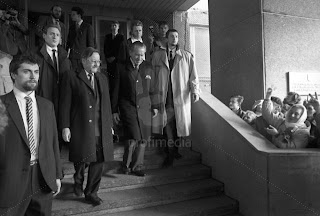 I did a double take last night when one of the television programs marking the confrontation with the Soviet tanks in Vilnius on January 13, 1991, showed Nixon before the nascent Lithuanian parliament in March, 1991.  This was before the United States had formally recognized Lithuania's independence.  It was part of a two-week visit to the Soviet Union, including stops in Tblisi and Moscow.  Apparently, Nixon had a soft spot for Lithuanians.  Nixon returned the favor by inviting provisional president Vytautas Landsbergis to Yorba Linda in May, and facilitating talks that led to the US recognition of Lithuania as an independent country.  Dan Quayle visited the country in February, 1992, after its second independence had formally been recognized by the United States.