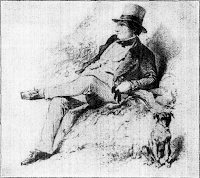 This will be an open discussion on Washington Irving for those interested in exploring his rich literary and diplomatic legacy.  Irving is probably best remembered for The Legend of Sleepy Hollow and Rip Van Winkle.  His work was wide and varied, including his Knickerbocker's History of New York and a biography of George Washington, whom his parents named him in honor of.  He was probably the first commercially successful writer in America.  He was well traveled, spending a large period of time in Europe, where he took a particular interest in Spanish culture, penning several works of fiction and non-fiction, notably Tales of the Alhambra.  In 1842, he was appointed US ambassador to Spain.

With so much to draw from, one would think that Brian Jay Jones would have written a very compelling biography, but alas it falls flat.  One needn't read the biography to join in the discussion.  Irving is one of those writers we have all heard of, and there is much directly available on the Internet to draw from.  Here is one such example, Washington Irving, Esquire, which focuses on his diplomatic career.