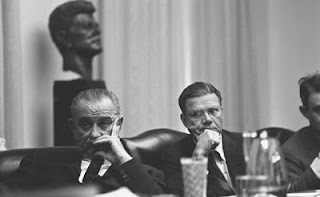 I struggled to find the right title for my thoughts on Episode 7 of Oliver Stone's Untold History of the United States.  Many came to mind in watching the episode.  I also liked the famous quote he took from the clip he showed from Apocalypse Now, "I love the smell of napalm in the morning."  I also was struck by how Ollie viewed American political figures as "Demons and Angels," presenting them more as caricatures in his long running narrative of America's Cold War, rather than as the complex figures they all were.

In this episode it is Lyndon Johnson who gets the short end of the stick, as Stone vilifies him as a Cold War demon, whose "foreign policy was profound in a primitive way."  Johnson was certainly intent on winning the war in Vietnam, and would accept no compromise, but Stone fails to mention that LBJ pushed through the Civil Rights Bill in 1964 and ended poll taxes and other nefarious forms of restricting black voting rights in the South with the passage of the 24th amendment, even as Stone alludes to the domestic turmoil in this episode.  Stone focuses exclusively on Johnson's role in Vietnam, and other heinous foreign policy decisions in Indonesia and Brazil.

Stone sees McNamara, who served as Johnson's chief architect of the US's war in Vietnam, as a 1960s Oppenheimer, who came to see the ravages of war and could take no more of it, opting out as Sec. of Defense to become head of the World Bank.  But, Johnson kept Mac on a short leash, and used the World Bank to help topple the democratically-elected government in Brazil, by refusing to grant loans to the new government, which resulted in the military coup of 1964.  McNamara would come to regret all these decisions, which was evocatively captured in The Fog of War, a documentary by Errol Morris.  Surprisingly, Stone doesn't reference this film.

Instead, Stone references many other films including an odd 1977 film, The Private Files of J. Edgar Hoover,  in which he shows a feisty Martin Luther King, Jr. staring down a seemingly apologetic Hoover, shockingly out of character.  But, the scene suits Stone's sense of moral indignation over the roles the FBI and the CIA played in stifling protest movements in the US and civil insurrections abroad.

There is also a clip from Costa-Gavras' Z, to help illustrate how the US was responsible for the squashing of the newly elected democratic government in Greece, which I guess served to illustrate that the US was no better than the Soviet Union when it came to creating "satellite nations." 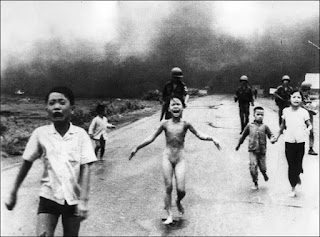 Surprisingly, there were few mentions of the Soviet Union or even China in this episode.  Stone bears down heavily on the atrocities the US committed abroad in this episode, noting that it was only with Sy Hirsch's daring expose of the My Lai massacre that Americans began to understand the brutality of this ugly war.  Yet, Lt. Calley got off with a partial pardon and the incident was brushed over by the media, as it did most everything else about the Vietnam War according to Stone.

A kind of "fog" descended over the American people, made even worse by the 1973 recession.  Nixon didn't fair any better in this episode, as one might imagine, but Nixon's role is largely seen as an extension of Johnson's policies, culminating in a Peace Agreement that Stone says was little different than the one Johnson first proposed in 1968.  No mention of SALT or Detente or Nixon's famous visit to China, just Vietnam and Watergate.  The scene of Nixon leaving the White House by presidential helicopter in 1974 is used to echo that of the air lift at the US embassy in Saigon.  An administration and a set of policies ended in failure. 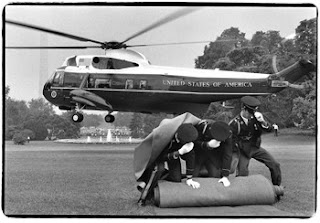