The End of History, Part I 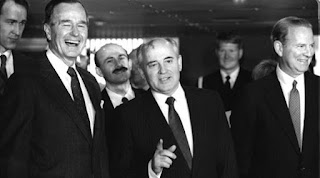 In Episode 9 of Oliver Stone’s Untold History of the , he cites Fukuyama’s famous declaration in 1989 that the collapse of the signaled the end of history as such, and the universalization of Western liberal democracy.  However, what may have appeared to be a new era of great peace soon found itself bogged down in another war.

Oliver Stone sees the 1988 election of George H.W. Bush not so much an extension of the Reagan administration, but a new era in “triumphalism” that would continue through the administration, in which the emerged as the world’s lone superpower intent on exerting its military and economic influence all over the world.  The opportunity had been missed to build a brand new alliance with the .

Stone assails H.W. Bush for not fully reaching out to Gorbachev at this time, but instead caving into neo-conservative interests that wanted to see the cleaved apart and made weaker.  Stone forgets to mention the great turmoil within the that led to its collapse in 1991.  Instead, he sees the Bush administration’s embrace of Yeltsin as a purposeful attempt to marginalize and discredit Gorbachev, who Stone cites as “one of the most visionary and transformative leaders of the 20th century.” 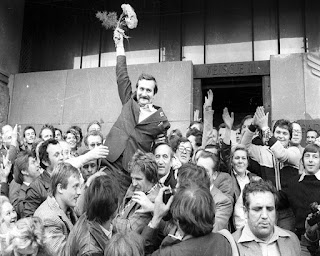 There are several things wrong with this premise.  First, the had been teetering on the edge of collapse for more than a decade.  Not once does Stone mention the Solidarity movement in or bother to explore the fragmentation occurring in the country during this time.  It wasn’t just the Warsaw Pact that was splitting apart, but the was convulsing inside, with separatist movements throughout its vast union.

Secondly, Stone erroneously ties the Baltic nations with the Eastern bloc nations.  The Baltics had been fully absorbed into the Soviet Union after WWII and would remain a part of the for 2 more years, gaining independence in 1991, not 1989 as Stone implies in his brightly colored maps.  He also fails to note that Gorbachev used economic blackmail to hold the the Soviet Union together, cutting off natural gas and fuel supplies to the Baltics when they seceded in 1990.  Since the Baltics refused to buckle, long used to deprivations of this kind, Gorbachev commanded tanks to roll into in January, 1991, in an attempt to crush ’s independence bid once and for all.  However, he seemed to have second thoughts.  His place in history as the great transformational figure might be lost if the uprising in turned out to be just another Prague Spring, and so Gorbachev withdrew the tanks 3 days later. 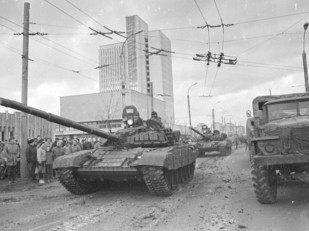 Lastly, Gorby's vision of the new Soviet Union was of a “kinder, friendlier superpower,” just like George H.W. Bush had extolled for during his 1988 election bid.  This is what Perestroika and Glasnost were about, only the restructuring and openness Gorby imagined was not what the suppressed republics within the imagined.  Gorby never for a moment imagined the fall of the , and did what he could to hold it together.  It was only when the wheels began falling off, and Russia itself declared independence (led by the feisty Boris Yeltsin) that it became clear to Gorbachev his dream of a revitalized Soviet Union was over.

Oddly enough, Stone promotes this pipedream, saying that if H.W. Bush had worked more closely with Gorbachev, he could have helped hold the together!  I was stunned, not just from my personal perspective, but from that of the 13 former Soviet republics which are now independent, and the incredible bloodshed witnessed in for 10 long years in its failed independence bid.  Stone seems to think of Mikhail Gorbachev as the Man of the Century, his Henry Wallace writ large, and there is nothing that can deflect this opinion, as he reads from Gorbachev’s recent memoirs.
Posted by James Ferguson at 11:17 PM