Do they know it's Christmas? 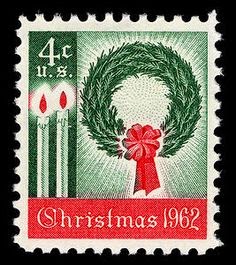 'Tis the season when we scramble to get our Christmas cards out by mail.  Those of us who still do anyway.  I was surprised that the first US postage stamp to commemorate Christmas wasn't issued until 1962.  It was a pretty simple stamp.  Christmas stamps have tended to be  pious even though many persons seem to believe the federal government has abandoned the meaning of Christmas all together.

There have also been playful stamps issued, as well as ones marking Hannukah and Kwanzaa.  There have even been stamps commemorating Muslim holidays, simply referred to as EID stamps, which have generated a fair amount of controversy since the first such stamp was issued in 2001.  We live in a pluralist society, like it or not, and stamps are a way of commemorating the diversity of this nation.

Nevertheless, there remain those ardent religious conservatives who believe the true spirit of Christmas is in danger and are determined to save it through such films as Saving Christmas, soon to come to a theater near you.  Sarah Palin had similarly issued a call to arms last year with her book, Good Tidings and Great Joy, against those nasty Christmas deniers, which was soundly debunked.

Every year, Fox news can be counted on to rekindle the faux "War on Christmas."  Last year was a real doozy, as a Festivus Pole in Tallahassee, Florida, became the whipping post of Fox pundits.  For those of you who don't know what a "Festivus pole" is, here is a clip from the Seinfeld episode in which it was first presented.  The pole in question was put up in response to Governor Scott wanting to have a nativity scene in the state capitol, but in order to do so he had to allow persons to express themselves on this holiday, so one enterprising man erected his aluminum pole.   Apparently someone had already seized on the joke with his own commemorative US postage stamp in 2009.

We need to be reminded of all the hunger and great sorrow in the world as well.  A new British pop dream team has rekindled that old favorite song, "Do They Know It's Christmas?" for Ebola victims in West Africa.  But, that's nothing like Mariah Carey struggling through an a cappella version of "All I Want For Christmas" to open Rockefeller Center for the holidays.

It is unfortunate that Christmas inspires such anxiety and overwrought performances, but then it has never been a particularly easy time for anyone.  Bringing the family together again under one roof often brings with it many tensions, sometimes long suppressed, which have a nasty way of rising to the surface.  That is why it may be better to just send a nice card with a commemorative stamp to mark the occasion.
Posted by James Ferguson at 6:29 PM