What ever happened to Juan? 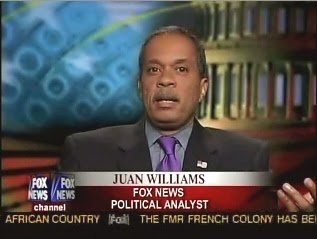 A few years back Fox poached CNN and NPR for a few liberal faces to give some credence to its news motto, "Fair and Balanced."  If you remember, Juan Williams (in)famously defended Bill O'Reilly, which he said earned him the enmity of NPR, and led to his subsequent dismissal.  Juan had been "moonlighting" for quite sometime, and the last straw was his defense of O'Reilly over racial profiling regarding Muslims.

Since 2010, Juan has been working for Fox, which pays him much more than he ever got at NPR.  He is co-host of The Five, which actually has seven Fox personalities sharing the honors, but who's counting.  Among them is Bob Beckel, another token "liberal" on the network, who has generated his fair share of controversy with some of the comments he has made, proving he can be as good a bigot as anyone else at Fox.

You have to wonder what these once respected journalists gain by serving as pundits for Fox other than money?  Their credibility has deteriorated during this time.  In Beckel's case, it is virtually non-existent.  Juan still has some clout thanks to the books he wrote in the past, and often cites on the program.  However, after this outburst you really have to wonder why anyone would give him anymore credence.

It seems Juan is still smarting from being let go by NPR.  It may not have paid much, but working with NPR gave one significant clout in the news media.  Why else would Bill even invite him on his "Factor?"  Juan's comments regarding NPR are particularly amusing since any number of noted conservatives contribute to the program, including David Brooks, who also writes for the New York Times, which is also considered part of the "liberal elite."  If Juan has learned anything over the last four years with Fox it is to blame his own shortcoming on the liberal media.

Juan offers his broader view on his relations with NPR in Muzzled, which NPR was gracious enough to review.  Unfortunately, he no longer seems to matter much either at Fox or the news world at large, which is a shame since he offered one of the best books on the Civil Rights Movements, Eyes on the Prize, that was made into a PBS documentary series in 2006.

Posted by James Ferguson at 2:43 PM