It began with a handshake 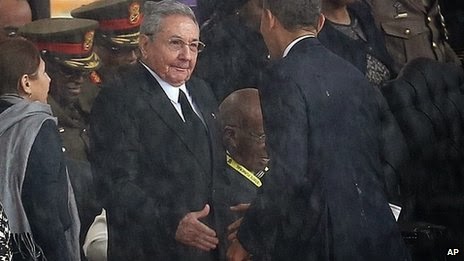 The writing had been on the wall for quite sometime, but it still took Congress and the media by surprise that the President actually normalized diplomatic relations and eased traveled restrictions with Cuba.  Opportunities date back to Jimmy Carter, but there had been too much political pressure against Democratic administrations to do so.  With the reviled Fidel Castro on the sideline, Pres. Obama finally seized the opportunity with Raul Castro to end this ridiculous embargo, which has plagued US relations with Latin America for decades.

Of course, this latest executive decision was not received well among conservatives in Congress and in the media.  Marco Rubio offered a particularly vitriolic retort,  but let's face it Cuba is no longer the bogeyman it once was, if it ever was.

We made a demon out of Castro because it suited us politically.  It allowed successive presidential administrations to bring the Cold War closer to home.  Conservatives had all the justification they needed in the Cuban Missile Crisis, even though the US had previously positioned nuclear warheads in Turkey aimed at the Soviet Union.  Kennedy was able to "stare down" Khrushchev by promising to remove the US warheads from Turkey, which he did after the Soviet Union had removed its warheads from Cuba.  Tit for tat, as was so often the case during the Cold War.

After the fall of the Soviet Union, the US maintained the same Cold War attitude toward Cuba, despite what were seen as largely positive signs coming out of Cuba for normalization of relations.  However, the shooting down of two "civilian" planes by Castro in 1996 led to the Helms-Burton Act, further freezing relations with Cuba.  Clinton tried to ease those restrictions in the wake of Pope John Paul II's historic visit to Cuba in 1998, but his measures only went so far given a recalcitrant Republican Congress.

The Helms-Burton Act is still in effect, so Obama cannot lift the trade embargo without Congress's consent, which seems unlikely in the immediate future.  However, American business interests will most likely push Congress to lift these restrictions as they smell a new market in Cuba.  The 1996 Act is regarded as one of the most heinous set of foreign policy restrictions passed in the last 20 years, and seems pathetically antiquated given that we are one of the few countries not to have normal relations with Cuba, pretty much negating the intended effect of the embargo.

What it has done is split families and engender hostilities between Cuba and exiles living in the United States.  Rubio represents the conservative wing of those Cuban exiles, which once commanded a strong influence in American politics.  This latest action by Obama indicates that this influence has waned and that we have truly entered a "new chapter" in our relations with Cuba. To think it all began with a handshake.

Posted by James Ferguson at 8:45 AM