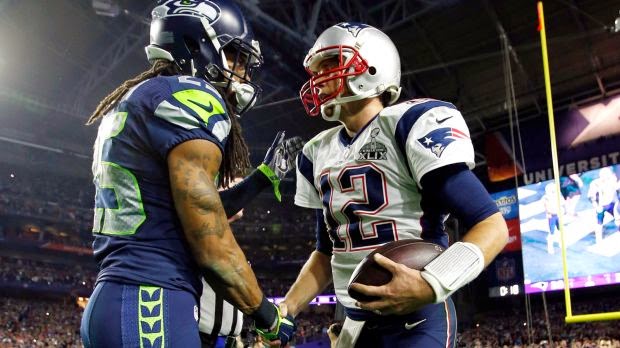 With all the excitement over the game, Obama's Super Bowl interview has been lost in the media shuffle.  Huff Post is one of the few outlets to report on it, giving a 30-second sound bite to his plea to parents to vaccinate their kids.   Even Katy Perry's moment in the Super Bowl spotlight has been forgotten, except for a bit of improv by one of her sharks that went viral after the game because he was so badly out of step with the routine.

"Deflategate" has also been forgotten after what many sports pundits are calling the worst play call in Super Bowl history when the Seahawks elected to pass rather than run on a very short second and goal that would have given them the victory.  This after the amazing catch by Jermaine Kearse, recalling the 2007 Super Bowl when New England had lost in a similar fashion.

However, all the media attention around the under-inflated balls in the AFC championship game probably helped boost television ratings through the roof.  This was the most watched Super Bowl ever, and boy was it a doozy from start to finish.  Tom Brady's legacy had been called into question, until he engineered two fourth quarter touchdown drives to give the Patriots the lead with just over two minutes left.

It proved to be the longest  two minutes of his life, as Seattle marched the ball just shy of 80 yards down the field and appeared to have the game in hand, letting the clock tick away as they set up one final play that would further add to Brady's woes.  Instead, a young rookie free agent stepped in between Russell Wilson and his intended receiver to save the day for "Two-Step Tommy," as Snoop Dogg had dubbed him before the game.

You can't get any better than that, at least not for New England fans.  Unfortunately for Seattle fans it is going to be a long, long, long off season, reliving and rethinking that play over and over again.

The goat is offensive coordinator Darrel Bevell, not so much for calling the ill-fated play, but for blaming the receiver, Ricardo Lockette, for not going hard enough to the ball.  You see Seattle likes to play smash-mouth football, but young Malcolm Butler saw this play coming and beat Lockette to the ball.

Seattle prides itself on team unity.  No one person takes the credit, no one person takes the blame, except for Head Coach Pete Carroll who accepted full responsibility for the call, which is the way it should be.  Unfortunately, Bevell couldn't leave well enough alone, I guess because he figured the blame would eventually fall on him as the one who devised the play during the time out.

Meanwhile, Obama can rest easy.  For once his appearance isn't being chopped up and parceled out in the media the next day with everyone chewing over the morsels.  NBC televised the game this year, so he didn't have to face Bill O'Reilly.  He showed the White House kitchen to Savannah Guthrie, and the two enjoyed one of his home brews before the game.

In the end, we are left with the indelible image of Richard Sherman going up to Tom Brady and congratulating him after the game.