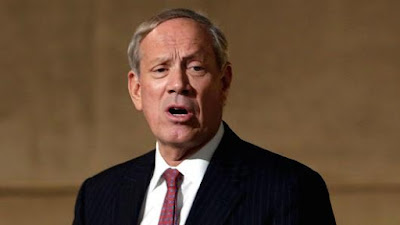 I bet you didn't see this one coming.  I sure didn't.  George Pataki has to be the least likely of Presidential candidates, nearly ten years out of a job, not that very many even knew him when he served three terms as governor of New York.

It seems George is trying to cash in on his leadership following 911, judging from his video clip.  It didn't help Mayor Ray in 2008 and I doubt it will get much play in 2016.  The funny part is that he announced his candidacy in New Hampshire.  I guess he thinks this will give him a leg up in the state primary, the first in the election cycle after the Iowa caucuses.  It's the only hope he has of making his mark early in the Republican primaries.

However, Pataki looks like another one of those vanity candidates hoping to get some free publicity and land a spot on Fox News.  He hasn't seemed to be doing much with himself since he stepped down as governor in January, 2007.  He set up a "Leadership and Learning Center" in Peekskill, New York, best known as the original home of Crayola Crayons.  His organization doesn't get much notoriety, and he isn't a favorite on the Republican speaking circuit.

Pataki's reign as governor was largely uneventful except for 911 and his attempts to spur the redevelopment of the World Trade Center site.  Sadly, not much was done, as a battle developed between the city, state and private developer, Larry Silverstein, which thwarted construction for years.  George had lost favor among much of the conservative faithful of his party during his long tenure, including the New York Post, which ran a scathing attack entitled Good Riddance upon his departure.

The biggest problem facing him is reconciling his social liberalism with the ardent social conservatism so prevalent in the GOP.  This is a guy who supported gay rights in his state and is pro-choice, which is going to put him at odds with the Republican base in most states.  One of the hot button issues emerging in this campaign is gay marriage, with no less than a dozen GOP governors pushing legislation that would make it difficult for gay couples to enjoy the social privileges normally associated with marriage.  The Log Cabin vote in the GOP is quite small.

More likely, he will shy away from these social issues as others have done.  Mitt Romney essentially disowned his gubernatorial record in Massachusetts last time around.  I guess George is hoping he can successfully reinvent himself on the campaign trail as well, but at 69 that is an arduous task with so many young guns vying for the top spot.

Maybe George sees himself in the mix for a cabinet or other high-level job if a Republican wins the White House, maybe even Ambassador to the United Nations?  In 2007, he briefly served as George Bush's delegate to the UN General Assembly, focusing on terrorism and (gulp) climate change during the GA session.

The more the merrier, I say, but George is going to have a hard time making the cut for the first debate scheduled for August 6 on Fox News.  Only the Top Ten polling candidates will be invited.  Good luck, George!