No need to fear, Underdog is here 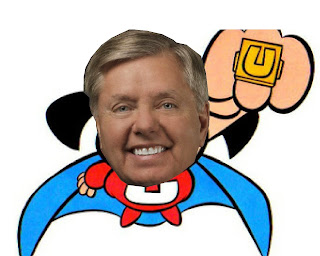 Yes, that's right folks, Lindsey Graham is running for President because the "world is falling apart."  He is only polling a miniscule one per cent in GOP presidential straw polls, but not to worry Underdog is here to save us from the evil forces confronting us in this crumbling world.

Lindsey has been sounding the alarm for some time now, firmly believing that ISIS may kill us all.  That's why he plans to send no less than 10,000 troops into Iraq, if elected Commander-in-Chief, to rid us of this pernicious threat once and for all.  Uber-Lindsey doesn't think the Iraq War was a mistake, saying, "at the end of the day, I blame President Obama for the mess in Iraq and Syria, not President Bush."  Are you listening, Jeb?

It is easy to dismiss Lindsey's candidacy as a joke, as he is seen as little more than a fringe figure in the Republican Party.  But, that's the way many felt about Rick Santorum last time around and he ended up winning 11 states and nearly 4 million votes, a whopping 20 per cent of the GOP electorate.  In a much more crowded field this election year, Lindsey would be in the hunt with numbers like that.  The only question is whether the Republican electorate will embrace this rather effeminate man who is now projecting himself as a super hero.

My guess is not, but that shouldn't stop Lindsey from running.  The more the merrier I say.  It's looking like a new season of Survivor with all these candidates. Reince Priebus will have to split these presidential wannabes into "tribes" to accommodate a field that could be as many as 30 candidates, looking at this GOP straw poll.

If it is any help, Lindsey Graham appears to have Sheldon Adelson in his corner, who has pledged $100 million this election cycle.  Of course, Sheldon backed Newt Gingrich last time around and he didn't get very far, only managing to win two states, Georgia and South Carolina.  Still, Lindsey's home state is one of the first primaries, so he should get a leg up early in the race, and maybe more money will pour into his campaign, if Jeb doesn't score well among early Republican voters.

In the meantime, we will continue to see a lot of posturing on the part of the GOP presidential candidates. This is what Lindsey does best, so he should manage to keep himself in the news.  Good luck, Underdog!