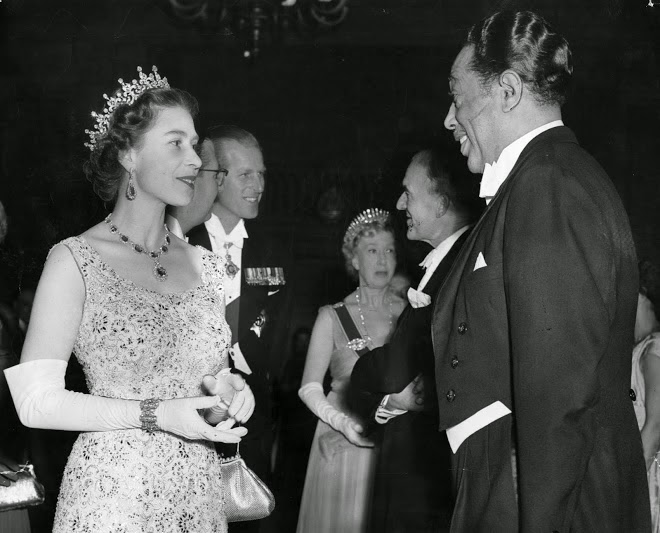 Queen Elizabeth is coming ever closer to Queen Victoria's 63 years on the throne.  She was crowned back in June, 1953, and among many of the tributes to her in the years that followed was this suite composed by Duke Ellington, which first premiered in 1958 and he recorded in 1959 and sent her a copy.  He meant it as a gift to her and never released it in his lifetime.  Some wonder if the Queen herself ever listened to it.  But, the suite was revived in honor of her Diamond Jubilee.  My favorite piece is "The Single Petal of a Rose," the fifth part of the suite.

Duke Ellington had long been known for his masterful arrangements.  Black, Brown and Beige was his signature suite, with Mahalia Jackson lending her voice to this truly magisterial jazz symphony, released in 1958.  It had first premiered in 1943, and he had reshaped it with the help of Billy Strayhorn in the time between.  He had also given perhaps his most memorable performance at Newport in 1956, and followed it up with another rousing performance in 1958.  Here was Ellington at the pinnacle of his career being presented to the Queen at a private reception for the Leeds Festival that year.

It's a shame the suite doesn't get more attention, if for no other reason than the social importance of this historic meeting.  It would be three years later that John F. Kennedy named Ellington to lead a delegation to Ceylon as part of a goodwill tour.  This experience would serve as his inspiration for the beautiful Far East Suite, released in 1967.  Here is Mount Harissa.   Ellington was eventually honored with a Presidential Medal of Freedom in 1969, by Richard Nixon.

Posted by James Ferguson at 2:04 PM