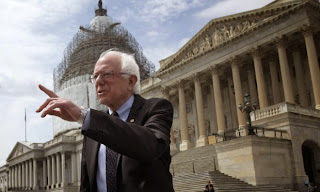 Looks like the Bernie for President campaign might not be a joke after all.  His campaign reported it raised $1.5 million in the 24 hours after his announcement, outpacing Republican hopefuls on their first day of campaigning.  Hillary didn't disclose her first day contributions.   Bernie is running a grass roots campaign much like Jesse Jackson and Jerry Brown ran in 1984 and 1992 respectively.  Being a vehement critic of big money in the campaign, there will be no Bernie Super PAC raising money for him on the fringes.  As a result, he will find himself at a distinct disadvantage financially versus Hillary.  That might actually work for him, like it did Jackson and Brown, who scored big primary victories in their campaigns, although they were eventually routed by Walter Mondale and Bill Clinton.

Bernie comes across as Howard Beale from the movie Network.  Glaring at the camera with his disheveled hair, Bernie looks angry most of the time, but every once in a while a smile comes across his lips as though he has driven his point home.  He wants a political revolution against the billionaire oligarchs he feels are controlling the election process.  No argument there, but is Hillary really a part of that "class?"  If so, he threatens to mount a Tea Party-like campaign within the Democratic Party.

Twenty-plus years ago I would have been attracted to Bernie, but today there is too much on the line to play around with insurgent candidates.  I would hate to see the Democratic primaries turned into a three-ring circus, which appears to be the case with the GOP primaries now that Dr. Ben Carson and Carly Fiorina have announced their candidacies.

Not that the Democratic Party doesn't need a little shaking up.  It has grown stagnant in the last eight years, failing to generate any viable candidate for President other than Hillary Clinton, which has left many rank and file Democrats feeling they have been shortchanged.  Can Bernie tap into this dissatisfied mass?

Hillary has already adopted much the same message, aiming her campaign at a disgruntled middle class that doesn't feel its wages have kept up with the increased cost of living.  But, Hillary does come from the moneyed class, so you have to wonder how far she would go with reforms.  She certainly isn't going to exclude Super PACs from her campaign.  Ready for Hillary may look like a grass roots movement but it is a well-funded Super PAC.

Bernie estimates he will need $150 to $200 million to mount a serious challenge.  Even with this kind of money, he will be well short of the political juggernauts Hillary and Jeb Bush are assembling.  However, if he turns out to be the only one running against Hillary in the Democratic primaries, he should generate a lot of free publicity in the news, which he has already done.

Mostly, I think he is there to keep Hillary honest, as I don't think he feels he has a real chance here.  At 73, he represents the graying ideals of the Democratic Party.  Hillary isn't exactly a spring chicken, but she is more in step with the current nature of the electorate.  It would have been nice to see a younger candidate, say Julian Castro, the former mayor of San Antonio, who gave the keynote address at the 2012 Democratic Convention, but he like many others chose to stand aside for Hillary.  Not Bernie.