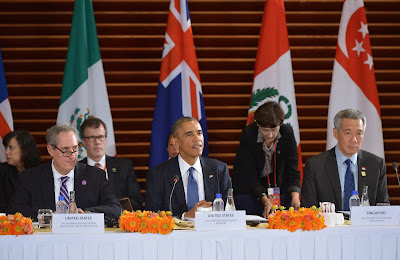 The current Trans-Pacific Partnership, or TPP, has been unfavorably compared to NAFTA.  Democrats have come down hard on the free trade agreement being proposed by the Obama administration.  One of the harshest critics is Robert Reich, who was Bill Clinton's Secretary of Labor back in 1993.  I guess if he knew then what he knows now, he would have never gone along with NAFTA, like so many Democrats anxious to create a greater North American trade union.

It was Ross Perot who likened NAFTA to a giant sucking sound drawing away jobs from the United States.  The AFL-CIO estimates that 700,000 manufacturing base jobs have been lost over the last 20 years.  It had been a bill first floated by George H.W. Bush at the end of his administration and embraced by the Clinton administration, ushering the new age of "globalization."  To be fair, what we lost in manufacturing jobs, we have more than made up in service-related jobs, but for a nation that so long prided itself on its manufacturing spirit, this trade agreement has gutted the traditional blue collar labor force in America.

Hillary Clinton finds herself in a similar situation to Jeb Bush in that she has to draw a line of distinction between herself and her husband.  So far, she has been non-committal on the subject, calling for a "time-out" on new accords until the impact of these trade agreements can be fully evaluated.  This was pretty much the same answer she gave when asked her position on the legalization of marijuana. 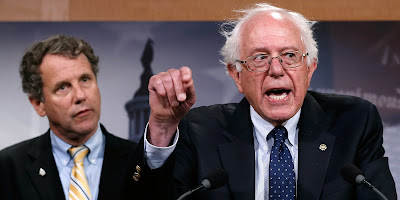 Bernie has made no bones about where he stands on the TPP, saying that this is nothing more than a tool of the "billionaire class" to fully subject us to low wages, poor environmental and health regulations.  Basically, echoing the same sentiments as Ross Perot back in 1992.

I have to admit it was kind of suspicious to see President Obama using Nike as the backdrop for his sales pitch on the TPP.  Nike is one of the biggest culprits in taking advantage of weak trade policies to outsource its labor, but Barry says that if Americans think these low skill manufacturing jobs are coming back to America, we are hopelessly naive.   The President has said it is more important to protect our "intellectual property" and service-related jobs, which we consider ourselves so good at.

The United States has long shifted toward service-related jobs and Americans seem comfortable having production outsourced to developing countries, as long as they get their "everyday low prices" at Walmart.  Naomi Klein noted in No Logo that these American companies do not operate directly with developing countries, but rather sign contracts with local producers in these countries, freeing them of any liability in the manufacturing process.  Some of us would think this gives American companies a greater profit margin, but Nike would like us to believe it allows them to focus more on R&D and marketing back in the States.

Even curiouser is that you see very few Republicans coming out against this trade agreement.  In fact, Barry, Mitch and Boehner all seem to be on the same page on this one, which makes you wonder what the hell is going on here.  Truthout has gone so far as to label Obama a Trojan Horse President for pushing what looks like a Republican trade bill.  After all, isn't that what NAFTA was until the Democrats co-opted it as their own?

None of us really know for sure what is in this trade agreement, since it is subject to a level of secrecy that has frustrated the mainstream media determined to see what lies at the core of the TPP.  Our President says he is fighting for concessions on the part of Japan, South Korea and the Indochinese republics that would open doors to increase American exports to these countries.  Barry insists the TPP will level the playing field, which to this point has been heavily slanted in favor of Asia.  We shouldn't be thinking along the lines of NAFTA. 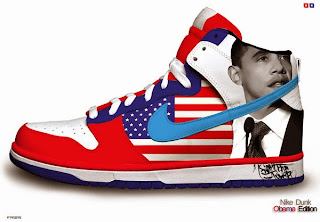 Given we have so little to go on other than cheat sheets provided by the Washington Post and New York Times, pardon us if we do compare the TPP to NAFTA.  It may not be the "giant sucking sound" that Ross Perot or Bernie Sanders would lead us to believe, but I think many of the fears being expressed are genuine and that if Obama wants to bring more Democrats on board, he better make a better sales pitch, otherwise it just sounds like a promotion for Nike.