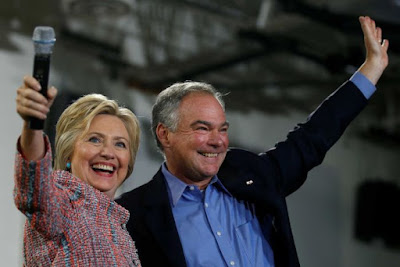 We should have expected this, as it is classic Hillary.  She has always played it safe.  Those who thought she might finally loosen up a little and make a daring pick are sadly disappointed, especially all those young Berniecrats who thought this time around might be different.

Tim Kaine isn't a bad choice, if your aim is to appeal to disgruntled Republicans and Independents who can't bring themselves to vote for Donald Trump.  Tim represents stability and has appeal to both Hispanic and Black voters.  He was a Catholic missionary in Honduras where he learned to speak Spanish, and he was a popular mayor in Richmond, which is predominantly Black.  This aided him in winning the governor's race in 2005 and the Senate seat in 2012.  It looks like Virginia is safe for the Democrats.

But, what of all those Berniecrats who were looking for a sea change in Democratic politics?  It looks like they will have to content themselves with a platform that is more liberal than usual, but with standard bearers that fall far short of expectations, which means they either have to swallow a bitter pill or look elsewhere for a standard bearer.

Jill Stein is openly courting Bernie Sanders and his supporters, and has seen her poll numbers rise to as high as 6 per cent.  Not bad for a Green Party candidate.  She is the only candidate actively supporting sustainable design and renewable resources, which has a strong appeal among young voters.

Hillary has tried to tilt her campaign in this direction, which ironically pushed one of the nation's largest coal producers, West Virginia, in Bernie's favor, despite he being a strong advocate of renewable energy sources himself.  However, Hillary uses that dreaded word "transition," which could mean five, ten or even fifty years.

Fortunately, much of the private industry is shifting toward sustainable design and renewable energy as it is cost effective.  We are already seeing the financial benefits of more fuel-efficient cars, appliances, home heating and cooling systems, as the US is less reliant on foreign oil than at any time in recent memory.   Not surprisingly, the Keystone XL pipeline has been a non-issue this campaign cycle, as there simply is no reason to funnel Canada's oil to Gulf Coast refineries, other than to benefit Canada.  So, Hillary has nothing to lose here.  As she does with adopting the bid for a $15/hr. federal minimum wage, which many states and cities have already enacted.

The irony is that she is slow to embrace universal health care, content to stay with the Affordable Care Act, which was never designed to be anything more than a stop-gap measure to remedy the number of uninsured Americans.  Back in 1993, she was a major advocate of a single-payer system.  Her "free tuition plan" looks like a quickly conceived compromise meant to appease Berniecrats, rather than address the underlying issue of skyrocketing tuition costs, playing out pretty much the same as the health care debate.

In a political campaign, you don't have to go too deep.  You just have to make your ideas look appealing and that's all Hillary is trying to do at this point.  She figures that most of the country wants to see more progressive legislation so she will make herself appear to be their champion, as opposed to Trump who would like to get rid of public services all together.  Hillary is not so much a champion, as she is a cheerleader in this regard.  One who would leave all the dirty work to someone else, if bother with it at all.  Of course, one could say the same for Trump, who has never done an honest day of work in his life.  But, what progressive Democrats are looking for is someone who will truly put up the good fight, which was why Bernie Sanders was so appealing.

The other concern is that she has tagged a senator.  No doubt, she will also look to the Senate to fill her cabinet appointments, as Obama did in 2008, which could cost valuable seats in Congress.  Virginia swings both ways and could easily fill the seat with a popular Republican.

The hope was that she would pick a progressive VP that would energize the party.  Elizabeth Warren, Julian Castro and Cory Booker were all high on her list.  A youthful face on the ticket would have given her campaign some badly needed punch.  Instead, we have Mr. Nice Guy.  That's not all bad, but certainly not very inspiring.