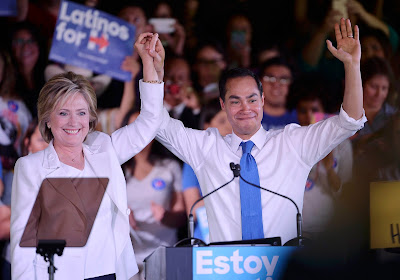 Let the VP vetting begin.  A lot of names are currently being tossed around for vice-president but one of the more interesting is Julian Castro, the former mayor of San Antonio and current Secretary of Housing and Urban Development.  Castro gave the keynote speech at the Democratic convention in 2012 but has been kind of quiet since then.  Hillary turned to him early on the campaign trail and likes what she saw.  Castro would give her campaign a healthy dose of youthful energy, which she badly needs to carry her through the grueling months ahead.   Castro would also help draw out the sizable Hispanic vote that has voiced its disapproval of Trump.

The Democrats have the luxury to see which way the Republicans go, as the GOP is the first to hold a convention.  Trump is apparently leaning toward Newt Gingrich, but Marco Rubio is still being considered.  It doesn't seem like Trump is worrying too much about demographics.  According to those close to his campaign, he wants someone that suits his personality and would be "deeply loyal" to him, which narrows the list considerably.  At this point, Trump is having a hard time getting names lined up to speak for him at the convention.

Hillary does not have such problems.  She has a wide range of persons to choose from but would also like someone who suits her personality.   There has been a lot of talk she might pick Elizabeth Warren, but Liz has been one of her sharpest critics and it is doubtful the Democrats will go with two women at the top of their ticket.  Other names tossed out have included Sherrod Brown, Corey Booker and Tim Kaine, but none of these have far-ranging appeal, and since this is another campaign about "firsts," the first Latino VP nominee would be a very strong signal to the Hispanic community that the Democratic Party is with them.

Of course, the Donald probably views a VP as a useless appendage.  His campaign from day one has been all about himself and it is doubtful he is going to change his approach after the convention.  Trump seems to think he can sweep the "Berniecrats" out from under Hillary, leading to this amusing segment by Jessica Williams.  Of course, six persons represent a very narrow sample but there were a lot of "independents" who crossed over to vote for Bernie in the open Democratic primaries who had no real interest beyond seeing Hillary go down.  It makes sense these persons would probably vote for Trump.  But, it is going to take more than a few disgruntled Berniecrats to swing this election.

Right now, Donald is having a hard time holding onto core Republicans.  This is why a good VP nominee is key to him avoiding a mass exodus of mainstream Republicans who have already said they want nothing to him.  It would at least show he is willing to listen to their point of view.   But, Donald feels he is now running against both Democrats and Republicans and is content to continue to make divisive comments that he believes appeals to the broader public, especially on trade issues, which he has now made central to his campaign.

Hillary will play this campaign by the numbers, which she has on her side when you look at the latest polls.  Trump had hoped the Brexit vote would give him a lift but here we are a week later and no one seems to really care anymore.  Even the leading Brexiters, Boris Johnson and Nigel Farage, have retreated to the margins.  The staged trip to Scotland turned out to be bust, which was why he was immediately back in the US, peddling his message to Bernie Bros in Pennsylvania.   It is essentially Hillary's campaign to lose, which is why she has to be careful that Bill doesn't muck it up for her.

June was a great month for her until Bill had his unscheduled meeting with Loretta Lynch.  He has developed this nasty habit of being in the wrong place at the wrong time, confirming everyone's worst opinion of Hillary.  This is a man who has not only lost his charm but his timing, and led many observers to wonder aloud what exactly were the Clintons scheming with the US Attorney General.  It would be best for him to take a teaching job in Fiji than join his wife on the campaign trail, where he has the potential of doing her far more harm than good.

Still, the Democratic convention should be her shining moment.  It will be a star-studded affair and she needs to have a VP nominee that will bring the party together.  I can't think of anyone better than Julian Castro.