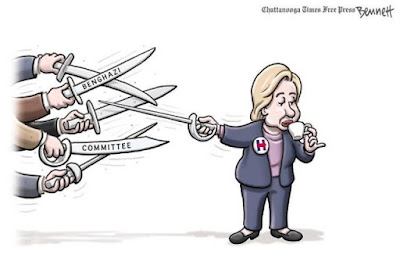 Hillary is leaving as many Republicans in her wake as is Donald Trump.  The latest victim is Trey Gowdy, who spent the last two years trying to dig up some dirt that would link Hillary to Benghazi and prove the ever-multiplying conspiracy theories surrounding her role in this nefarious attack on an American CIA base masquerading as a US special mission in Libya.

The aim of this mission was to offer logistical support and supply small arms to the Libyan insurgency in the last days of the Gaddafi regime.  It was now trying to form a new government sympathetic to US interests in the wake of the "Arab Spring."

These weren't heroes, as the media presented Stevens and his Navy Seal guard, but rather arms smugglers. Former Ambassador Stevens and the small staff worked closely with CIA contractors. This base was a target as there were competing factions trying to form a new government, some openly hostile to the US interests.   Everyone involved knew this and were prepared for immediate evacuation.  Calling in the military at the 11th hour wouldn't have saved Stevens or his guards  They had been outwitted by a gang of Islamic militants who effectively used the cover of riots to infiltrate the base and eventually track down a fleeing Stevens and his armed guard.

One can argue the efficacy of such operations, but Republicans were clamoring for action in Libya and the US has long used covert CIA operations to undermine regimes they don't like.  Nothing unusual about this so-called special mission, but the Republicans thought they could turn this tragic event against Obama in 2012 and against Hillary in 2016.  The only thing they succeeded in doing was stirring up the base of their own party, which Donald Trump ultimately used against the GOP establishment.

Of course, Donald would have liked to use it against Hillary as well but this latest report all but buries the case against Hillary Clinton.  Attention will now turn to the faux e-mail scandal, or any one of a sundry of past crimes and misdemeanors conservatives insist makes her unfit to hold public office.

The whole thing would be laughable if it wasn't for the outsized attention it has received over the years and the transfiguration of Christopher Stevens into some kind of White Knight.  This guy had made Central Asia and North Africa his specialty for years, operating at various levels throughout the region.  The Navy Seals turned CIA contractors have similarly been transfigured into heroes to protect the former ambassador against a horde of infidels.   As such, it has read like a B-movie script.

The Benghazi hearings have served mostly as a distraction.  Rather than look into the motives for our involvement in North Africa and whether it had any long term benefits, the media was fixated on Benghazi.  That was all we heard for months afterward.  Congressional investigations were carried out with reports that exonerated Clinton, yet these weren't good enough and the House set up a Select Committee under the leadership of 'Trey Gowdy to keep this inquiry going through the 2016 election cycle.

Gowdy was supposed to deliver the dagger but instead offer a limp-wristed speech saying sorry folks, I have nothing.  Instead of damaging Hillary, the Republicans have only made her look invincible, making themselves look weak by comparison.   For Hillary the timing of this report couldn't have been better, as she heads into the Democratic convention with a ton of momentum.  It's Gowdy who may now find himself in the hot seat this election cycle, along with other Republicans who failed to deliver.

Posted by James Ferguson at 6:30 PM