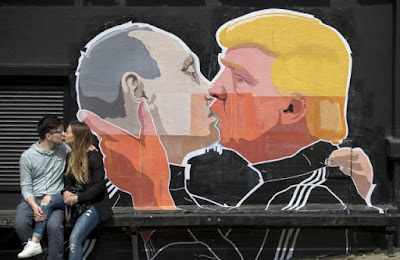 A lot of speculation is flying around as to who hacked the DNC e-mails.  The prime suspect is Russia, as many feel Vladimir Putin has the most to gain from a Trump presidency.  It is highly unlikely that this hack job will turn the election, but it allows the media to sound off on what it sees as an odd relationship that has emerged from this campaign -- the seeming "bromance" between Trump and Putin.

Trump has played on the "strong man" theme throughout his campaign, so it isn't surprising that he would be attracted to autocratic leaders like Putin and Erdogan.  After all, in his business he gets to call all the shots.  It turns out that not only Russia and Turkey like the "strong man," but so do many Americans.  The kind of surety Trump projects in his campaign is very appealing and for the most part overlooked by the press, which has focused mainly on his outlandish statements.

Putin projects power differently.  He is the strong silent type.  You never know quite what he's thinking, which leads you to guess as to his motives, usually assuming the worst.  For Americans, and indeed for many people around the world, this is deeply unsettling.  Not for Trump, who feels he can deal with Putin the same way he would deal with any corporate leader, striking a bargain that is mutually advantageous.  If the two can't reach a deal then they agree to respect each other's domain, which appears to be the case regarding Trump's recent comments on NATO.

Russia has long wanted to see NATO dissolved, as it did the Warsaw Pact following the break up of the Soviet Union and its satellite nations.  Trump appears to have very little respect for international institutions, preferring to conduct foreign affairs on a bilateral basis as he would his real estate deals.  This has sent shock waves through the international community.

However, there is little to suggest that Russia has any vested interest in this presidential campaign.  Whether it is Hillary or Trump, Putin will continue being Putin and there isn't much we can do about it.   This latest hack job may have come from within Russia, but it is highly doubtful it can be traced to the Kremlin.  Russia still has an old Soviet domain .su that was established in 1990.  It serves as a favorite dark spot for hackers to hide in.  These hackers can come from anywhere in the world not just Russia, and are hard to track once inside this virtual black hole.  A Trump hacker could have just as easily used this domain to sabotage the DNC as could a Russian hacker.  Nevertheless, there are those who suspect Putin uses this "red web" to his advantage.

I'm not a very big fan of Vladimir Putin, but what I see here is the same type of projection that we saw during the Cold War, making Putin into a convenient enemy.  The real danger in this election is how easily Trump has been able to play into the Nativism of Americans, appealing to their basest instincts.  This was on full display at the Republican National Convention, and amazingly enough Trump was able to come out of the convention with a "bounce," now polling slightly ahead of Hillary Clinton.

It is doubtful this "bounce" will last for long, and many media pundits are already discounting it because of the many factors that were taken into consideration in these polls.  Nate Silver still gives Hillary a 53 per cent chance of winning the general election based on her lead in key states.  Trump and his surrogates were effectively able to play on the "feelings" of the nation, which as we know changes from week to week like a "mood ring."

What hurts Hillary is not so much the leaked e-mails as her embrace of Debbie Wasserman-Schultz, which she announced as the honorary chair of her campaign's 50-state program.  Debbie has become largely reviled in the Democratic Party and was booed off the podium when she resigned as head of the DNC.  If this hack jab was meant to derail the Democratic National Convention, it failed.   The convention goes on with Bernie Sanders offering his full support of Hillary, unlike Ted Cruz who told Republican conventioneers to vote their conscience.

Vladimir Putin is a bystander in these events as are many other perplexed world leaders, who have become anxious watching a nation that prides itself on democratic ideals be so easily taken by a snake oil salesman like Donald Trump.  You might expect this in a third world country, but not the most powerful nation on earth.  It is in no one's interest to see Donald Trump elected President.  Trump's oft repeated disdain for international agreements no more favors Putin than it would any world leader, who relies on international agreements to maintain a relatively even playing ground.  Otherwise, it is every nation for itself in what would be a very bloody international field that would leave no nation unscarred.

Maybe, just once, we could dispense with the demagoguery and focus on the issues for a change.  The media has allowed the Trump campaign to reshape the way we think about the economy, immigration, crime and for that matter the world, despite having no figures to back up their views.  This "bromance" between Trump and Putin is entirely fictive, like just about everything else that comes out of the Trump campaign.  Trump's greatest selling point is playing the "strong man," and he will use whatever means at his disposal to project that image, regardless of the consequences.  As such, he presents a far more imminent threat than Vladimir Putin.